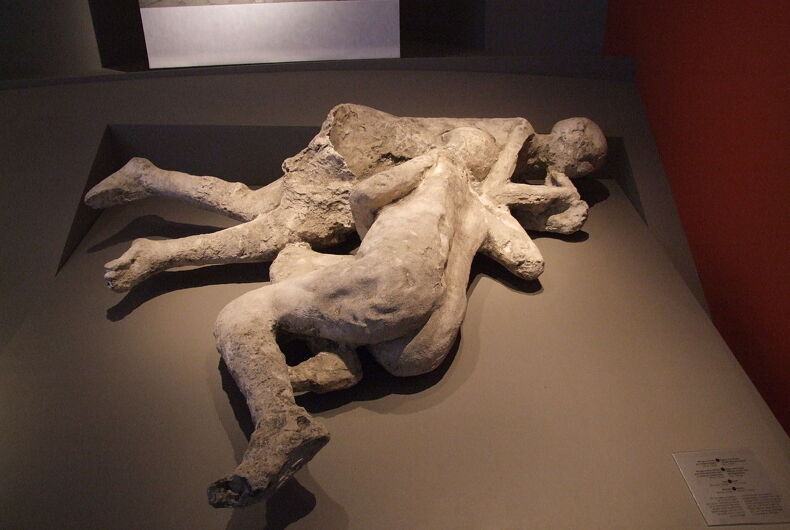 Archeologists at Pompeii discovered that two bodies holding each other that were previously thought to be female had male DNA.

Pompeii was a Roman city destroyed and buried in A.D. 79 by a volcanic eruption. The instant death and burial in ash and pumice preserved the village and made it the source of an extraordinary amount of information about what Ancient Rome was like.

Two bodies that were holding each other, with one person’s head resting on the other’s chest, were previous thought to be two young women and were even labeled “The Two Maidens.” Testing this week showed that they both had male DNA and that they weren’t immediately, biologically related. CAT scans revealed that they were probably 18- and 20-years-old.

One of the researchers posited the possibility that these people were gay lovers, and that was the eye-catching possibility that made it into multiple headlines about the story. For example, here’s the Telegraph‘s headline:

Embracing figures at Pompeii ‘could have been gay lovers’, after scan reveals they are both men

The article points out that the exact relationship between these two people is unknown. Still, considering other publication’s headlines and many of the quotes in the article, there’s something about two men holding each other that just screams “gay lovers” to a lot of people.

Of course, we don’t know the sex of the people who died there. One of the people could have had Swyer syndrome, where a person is born with XY sex chromosomes and female genitalia. One of them might have been transgender. They might have been related in some way that DNA testing wouldn’t show, like through adoption or as brothers-in-law. And maybe they weren’t holding each other but just sort of fell into this pose when smoke filled the city.

But what’s interesting to me, though, is the possibility that it is exactly what it seems like: two men, not related, holding each other in an affectionate way. What about that leads people to say that they were “gay lovers”?

Professor Stefano Vanacore, head of the Pompeii research team, put it this way, “When this discovery was made, that they were not two young girls, some scholars suggested there could have been an emotional connection between the pair.” Two women can’t have an emotional connection? If “emotional” is meant more like “conjugal,” then why were these two people assumed to be in a platonic relationship when they were women but in a sexual relationship now that they are thought to be men?

Talk about viewing history through the lens of the today’s culture. One thing that modern, Western people take for granted is how much policing of male affection we live with. In the US, straight men (or gay and bi men in straight spaces) usually don’t touch each other more than a handshake or a pat on the back. In France, men kissing “hello” is OK, but not much more. In other parts of the world, including parts of Africa, straight men sometimes hold hands just out of platonic friendship.

It’s obvious how deep this runs when people today assume that the only men who would ever – in any era or culture – touch each other are gay people in a sexual relationship. The desire for platonic touch among men is so repressed that many people just assume that it doesn’t exist.

On the other hand, while most people today would acknowledge the possibility of two women in a conjugal relationship, it’s not the first thing that people think of when they see two women holding each other.

When what people see changes based on the assumed genders of these people – while their pose remains exactly the same – the story is really about contemporary people’s gendered standards of behavior.

100 lashes for men caught having gay sex in Indonesia