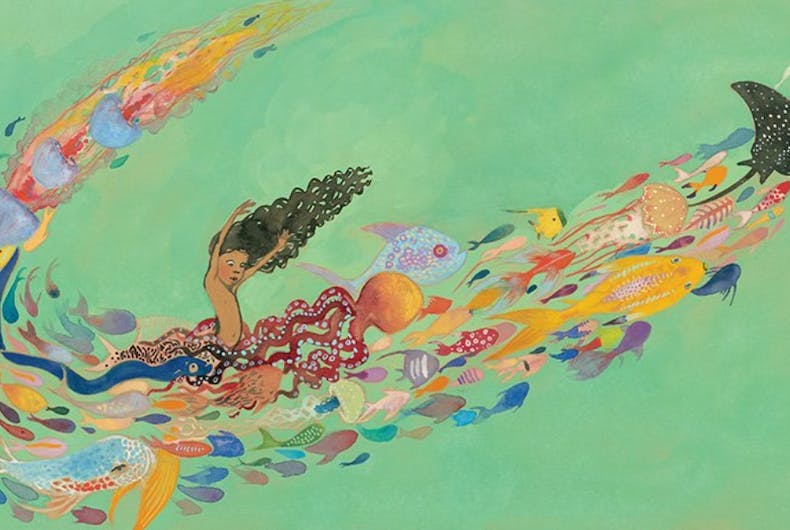 An an incredible children’s picture book about Julián, a boy who wants to be a mermaid, has won the prestigious Klaus Flugge Prize. The book has been called “a jubilant picture of self-love and a radiant celebration of individuality.”

The prize is given to the best new children’s illustrator and is one of the highest honors in the industry. The author, Jessica Love, won the award by a unanimous vote by the judges.

Julián Is a Mermaid tells the story of Julián, a young boy who wants to join the Coney Island Mermaid Parade.

While riding the subway home from the pool with his abuela one day, Julián notices three women spectacularly dressed up. Their hair billows in brilliant hues, their dresses end in fishtails, and their joy fills the train car. When Julián gets home, daydreaming of the magic he’s seen, all he can think about is dressing up just like the ladies in his own fabulous mermaid costume: a butter-yellow curtain for his tail, the fronds of a potted fern for his headdress. But what will Abuela think about the mess he makes — and even more importantly, what will she think about how Julián sees himself?

“Julian Is a Mermaid reminds us that picture books can make us understand the world differently and better; that they are for everyone. It is a groundbreaking book,” judge Julia Eccleshare told the Guardian. Judge and former children’s laureate Anthony Browne described the book as “astonishingly beautiful.”

Related: The 10 best books about bisexuality that should be on your shelf right now

Growing up with lesbian aunts as the heart of the family, Love says it helped to shape the book as she created it. She also cited her partner’s older brother, who had just transitioned when they met.

“For me, the coolest part has been the way different people respond to different elements in the story,” said Love. “There are some folks … who are there for the mermaid stuff, and some people who are there for the identity-affirmation stuff. People reach out to me on social media to tell me what it has meant to their families, to tell me that they were Julian when they were little.”

And when it comes down to it, we’ve all been that small soul who desperately wants to be free while fearing the judgement of the one we love most.

And the winner is…..
Jessica Love for ‘Julian is a Mermaid’!
Huge congratulations to Jessica on this wonderful book 📚🖌#KlausFluggePrize2019 pic.twitter.com/7ofXDtJ305