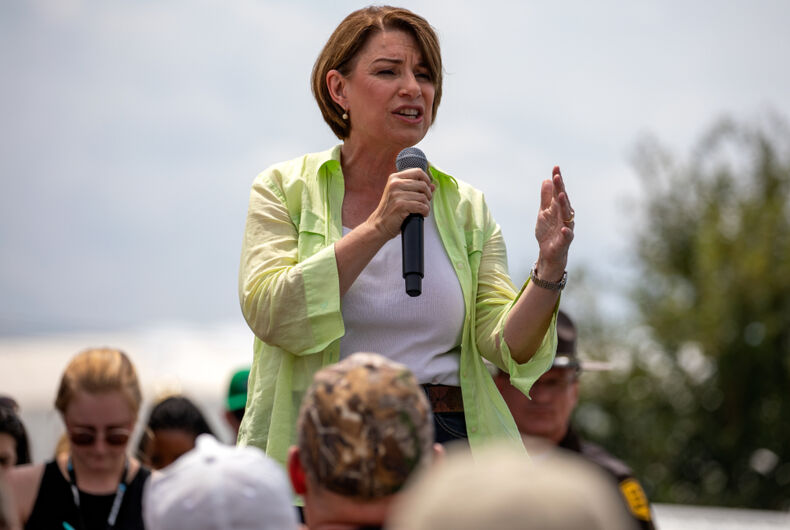 Presidential hopeful Amy Klobuchar (D-MN) sat down with Mara Keisling, the head of the National Center for Transgender Equality, to talk about her commitment to transgender issues.

Klobuchar hails from Minnesota, which, she proudly notes, was, “the first state, in the early 1990s, that actually had an anti-discrimination law that included trans people.”

“I was always understanding of some of the trans issues,” said Klobuchar, “and was appalled of course by what’s been going on lately with this president going backwards in terms of patriotic trans members of our country wanting to simply serve in the military, and then he bans them from doing it — which is one of the first things I put in for my first 100 days when I am president, I’m going to reverse that.”

The issue of transgender rights has been very much on the table this election season, particularly with the Trump Administration continuing to attack LGBTQ rights, including the transgender military ban.

The senator also pledged to reverse course on the administration’s stance that Title IX civil rights protections don’t protect transgender students, noting that “you don’t need an act of Congress to do it.”

“I will do that immediately,” said Klobuchar. “I pledge that to you right now.”

“The second thing I would do is replace (President Trump’s Secretary of Education) Betsy DeVos,” added Klobuchar. Cabinet secretaries from the previous administration, however, do not generally join the new administration and leave when a new president takes office.

Klobuchar is a co-sponsor of the Equality Act, to provide LGBTQ rights nationwide, and has worked on a number of trans-inclusive legislation over her career to date. She noted that some of her earliest pro-trans work was in hate crime prosecutions in Minnesota.

The first of these videos featured Cory Booker (D-NJ) speaking about his brother’s “niephew” — a clever combination of niece and nephew — and the work they have done to educate their uncle on trans rights.

Watch the complete video with Klobuchar below: