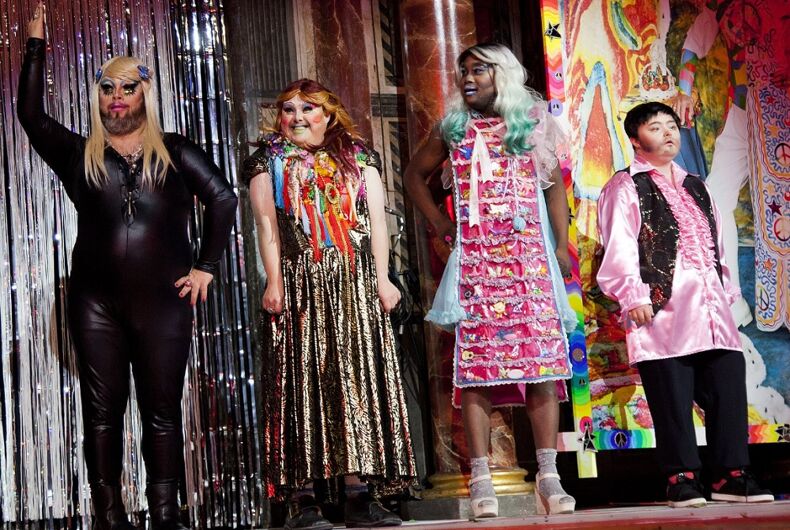 A venue is facing backlash after it canceled a drag show because some of the performers have Down syndrome.

The British drag group Drag Syndrome was going to perform at the Tanglefoot Building in Grand Rapids, Michigan, in September. But on August 19, Peter Meijer, the owner of the venue, sent a letter to the group to cancel their performance.

His reasoning? He wanted to protect people with Down syndrome from being “exploited” on stage.

“The differently abled are among the most special souls in our community, and I believe they, like children and other vulnerable populations, should be protected,” Meijer wrote in the letter.

Related: ‘Drag Syndrome’ is a fierce drag show where all the performers have Down’s Syndrome

He wrote in the letter that he talked with “the differently abled, people who had family members with Down’s syndrome, and members of the LGBTQ and artist community,” and everyone brought up the possibility of Drag Syndrome artists being exploited.

Meijer wrote that people with Down syndrome might not consent to doing drag, even though they’re performing in drag and literally saying that they want to perform in drag.

“The involvement of individuals whose ability to act of their own volition is unclear raises serious ethical concerns that I cannot reconcile,” he wrote. “I cannot know, and neither can the audience, whether the individuals performing for Drag Syndrome are giving, or are in a position to give, their full and informed consent.”

He was called out by DisArt, a Grand Rapids organization that promotes “expressions of Disabled cultural identity.”

“Exclusion is discrimination, it is self-preservation, it is exploitation for political gain. It is not protection.”

“I don’t want people in America to think that Daniel is abusing us,” Bond said, referring to Daniel Vais, the group’s creative director. “I know most Americans think it’s terrible. You’ve got Down syndrome, you don’t have what it takes.”

“But I think we do have what it takes because we deserve the right to be in drag and to perform.”

Statement from Justin Bond regarding the horrible attack on us. Thanks for your support and solidarity everyone! And wish happy birthday to our Justin Bond today! 🎂 #dragsyndrome #solidarity #t21 #downsyndrome #drag #humanrights

Another group has pulled out of its performances at the Tanglefoot. The Curiosity Theatre dropped three of its scheduled September and October performances.

“This is not a decision we make lightly but the censorship made by Peter Meijer of the UK group Drag Syndrome is in direct contradiction to the mission of Curiosity Theatre to include all voices and bring new ideas to Grand Rapids,” said the group’s executive director Krista Pennington in a statement.

DisArt said that Drag Syndrome’s show will go on, but it has not yet found a venue.

Disabled or not, don’t let bullies put you down. Fly high, high, high. You are in charge! #dragsyndrome pic.twitter.com/yzjeunV7Rv

A cop forced a trans women to have sex with him. He pled guilty to paying a prostitute.