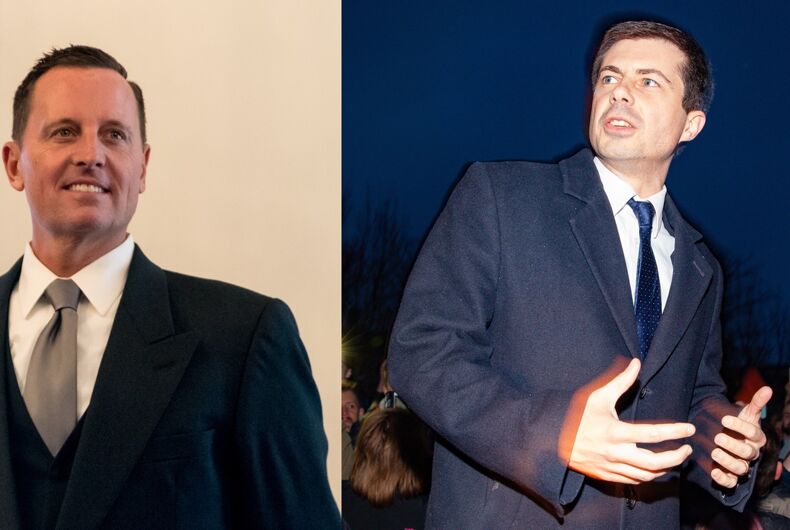 Grenell took aim at out Democratic presidential candidate Pete Buttigieg on Fox News, claiming Buttigieg is perpetrating a “hate hoax along the lines of Jussie Smollett.”

“Mayor Pete has been pushing this hate hoax along the lines of Jussie Smollett for a very long time now, several weeks, and I find it really ironic that Mayor Pete stayed silent about this so-called hate hoax on him and others during 2015, 2016, 2017 when Mike Pence was governor,” Grenell said on the president’s propaganda channel, Fox News. “There was total silence. It’s ironic that right about now when he’s starting his fund-raising apparatus to run for president that he comes up with this idea and this attack.”

“One of the things that really bothers me about this attack is that Mike Pence is a friend of mine. Mike and Karen are great people. They are godly people. They’re followers of Christ. They don’t have hate in their heart for anyone. They know my partner, they have accepted us. You ask me do we agree philosophically on every single issue? No.”

What Grenell fails to point out is that Pence also doesn’t think that he deserves protection from discrimination in housing, employment, credit, health care, and public accommodations. Pence thinks (or did, despite one “fact checker’s” best attempts to put a positive spin on it) Grenell could be “cured” of his “dangerous” sexuality. And Pence doesn’t think that Grenell and his partner should have the right to get married or start a family.

Buttigieg brought up how job discrimination against LGBTQ people is legal in most of the country, and then he challenged Pence.

“If he wanted to clear this up, he could come out today, and say he’s changed his mind, that it shouldn’t be legal to discriminate against anybody in this country for who they are,” Buttigieg said.

Grenell is loathed and shunned in Germany where lawmakers have demanded he be recalled to America.

Buttigieg is currently polling in third place in multiple polls and his campaign fundraising outperformed many other better-known candidates last quarter.

Anti-LGBTQ right-wingers are gloating over the Mueller report, but probably not for long