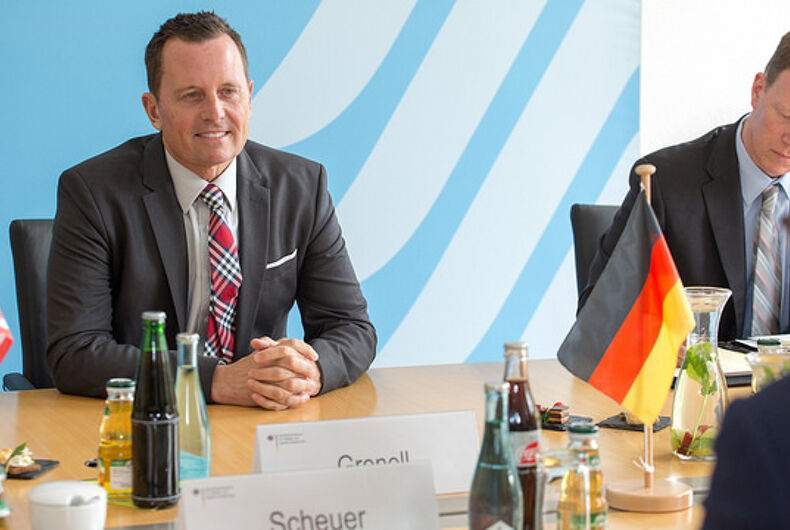 Donald Trump’s ambassador to Germany has been a complete “failure” according to German politicians who want to expel the gay diplomat from the country.

Wolfgang Kubicki, deputy chairman of the opposition Free Democrats (FDP), has called on Foreign Minister Heiko Maas to revoke Grennell’s credentials and boot him out of the country. Kubicki decried Grennell’s repeated interferences in German sovereignty by inserting himself into internal political affairs.

“Any US diplomat who acts like a high commissioner of an occupying power must learn that our tolerance also knows its limits,” Kubicki said.

Chancellor Angela Merkel deliberately avoids him. She hasn’t received him in Berlin, despite being in close contact with Grennell’s predecessor, former Ambassador and now-New Jersey governor, Phil Murphy.

While the ambassador has pressed parliamentarians to invite him to their districts, most have declined.

Grennell’s latest fiasco was caused after he criticized Germany’s NATO military spending plans as insufficient. He has also demanded that the German government halt a planned gas pipeline that would deliver fuel from Russia to Germany and threatened economic sanctions against any company who works on the project.

“If one keeps an overall view, many comments made are more coherent than those of the American ambassador, if he thinks he has to comment on something every week,” said Michael Grosse-Brömer, a member of Merkel’s conservative alliance government.

The bill was supposed to be about sick time. Instead, it became a challenge to LGBTQ rights.