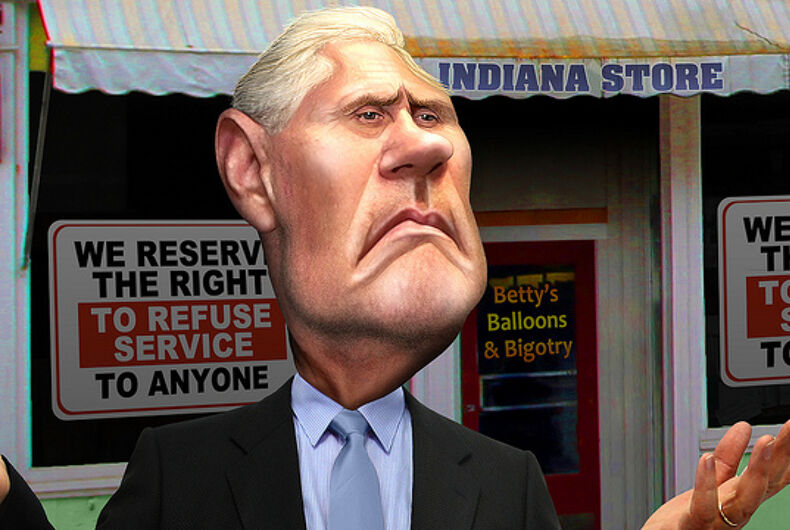 A gay Republican wrote a column for Fox News arguing that Mike Pence is not homophobic. His argument is less than convincing.

Greg Angelo, the former president of the Log Cabin Republicans, is offended that anyone would think that Pence is homophobic.

“Despite false accusations made against him, Mike Pence is not anti-gay,” Angelo wrote.

“As a gay man myself – and someone who not only cares deeply about these issues but advocated on behalf of the LGBT community myself for years – this is not an assertion I make lightly.

Related: Mike Pence’s top seven most homophobic moments (out of many)

His column, though, falls short of proving that point.

Angelo focuses on two specific claims against Pence: first, that he supported conversion therapy in his 2000 Congressional campaign, and, second, that Pence, as governor of Indiana, supported a 2015 law that would have legalized discrimination against LGBTQ people.

But you could fill up a lake with all of Pence’s anti-LGBTQ actions over the last two years that Angelo decided not to even address in his column.

In 2004, as a member of the U.S. House, Pence voted for a constitutional amendment to ban marriage equality. Justifying his position, he said, “Marriage is the glue of the family and the safest harbor for children.”

When he was a member of the U.S. House, Pence voted against the Employment Non-Discrimination Act, which would have banned employment discrimination on the basis of sexual orientation, and the Hate Crimes Prevention Act multiple times.

Federal hate crimes legislation had already been around for decades, but adding LGBTQ people to it was “radical”?

Pence voted against repealing Don’t Ask Don’t Tell, the law that banned gay and bi people from serving openly in the military. Pence said, “Homosexuality is incompatible with military service because the presence of homosexuals in the ranks weakens unit cohesion.”

In fact, Pence’s record in Congress is so anti-LGBTQ that he got a score of “O” on HRC’s Congressional Scorecard every single year he was in office.

As governor, he didn’t get much better. In 2013, he said that he was “disappointed” that the Supreme Court overturned part of the Defense of Marriage Act, which prevented the federal government from recognizing same-sex relationships.

“I believe marriage is the union between a man and a woman and is a unique institution worth defending in our state and nation,” he wrote in a Facebook post.

He also repeatedly blocked passage of a hate crimes law in Indiana. The state is one of only five without hate crime protections for minorities.

As vice president, he has given a keynote address at an anti-LGBTQ hate group conference, refused to mention LGBTQ people during his World AIDS Day addresses, gave a speech at a conference about “how gender ideology harms children,” and is rumored to be one of the chief architects behind the transgender military ban.

And his wife works at a school that bans LGBTQ people. If he disagrees with her choice, he has been silent about it.

None of this made it into Angelo’s column, where he declares “There is absolutely nothing – nothing at all – in Mike Pence’s record to indicate he sees himself as a culture warrior who believes LGBT Americans are the enemy.”

He says that Pence’s 2000 campaign statement – which was clearly about taking money away from safer sex organizations and giving it to conversion therapy organizations – is actually supporting condom use because Pence said he wanted to change people’s “sexual behavior.”

Angelo also doesn’t quote the rest of Pence’s 2000 campaign statements, which said that he opposed putting “gay and lesbian relationships on an equal legal status with heterosexual marriage” and any effort “to recognize homosexuals” who need “the protection of anti-discrimination laws.”

Angelo had one more argument, this one about Richard Grenell, another gay Republican who was appointed ambassador to Germany.

At Grenell’s swearing-in ceremony, Pence showed that he was able to stand in the same room with a gay man without calling him a “faggot” and screaming passages from Leviticus.

Even Donald Trump has quipped that Mike Pence wants to “hang all the gays.” His office refused to deny the allegation.

Trump knows Pence a lot better than Angelo does. Maybe this is one time we can take him at his word.