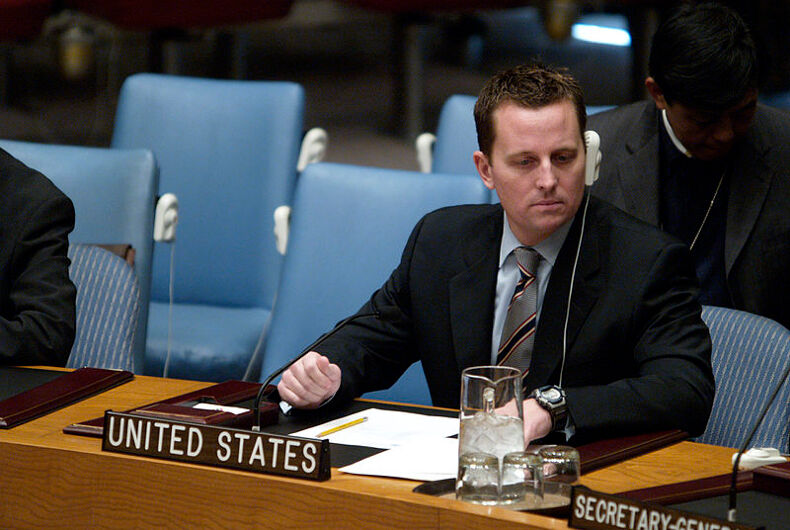 Richard “Ric” Grenell was sworn in Thursday as U.S. ambassador to Germany. He becomes the highest-ranking LGBTQ person in the Trump administration.

Vice President Mike Pence, with a long record against LGBTQ people, swore him in. At Grenell’s side was his long-time partner, Matt Lashey, a conservative Christian and graduate from Jerry Falwell’s Liberty University.

Democrats had reservations about Grenell’s confirmation not just because of his alignment with Bolton, but also because of his 2012 misogynist tweets that criticized the appearance of women such as Hillary Clinton, Michelle Obama, Callista Gingrich and Rachel Maddow.

Sen. Jeff Merkley, D-Ore., had held up Grenell’s nomination, and Sen. Bob Menendez, D-N.J., read some of Grenell’s tweets in the Senate:

“Did you notice that while Michelle Obama is working out on the BiggestLoser she is sweating on the East Room’s carpet?”

“Rachel Maddow should ‘take a breath and put on a necklace.”

Grenell’s confirmation could be Trump’s punishment of Germany for Prime Minister Angela Merkel’s criticism of Trump. His confirmation coincided with her visit. The vote was along party lines.

Pence praised Grenell at the swearing-in ceremony, and Grenell praised his boss in the White House.

“If every American could see President Trump negotiate, they would be wildly supportive of having him as their representative in the White House,” he said.