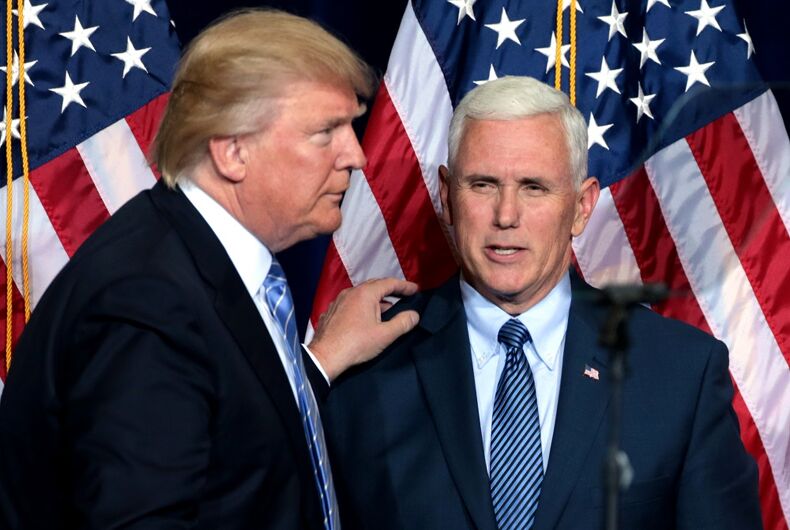 Human Rights Campaign Government Affairs Director David Stacy said, “Paul McHugh, Elizabeth Johnston and others peddling this sort of junk science are doing enormous harm to LGBTQ people and LGBTQ kids. The practice of ‘conversion therapy’ is abuse and can be life-threatening, which is why a growing number of states are banning it.”

Stacy added, “And the denigrating language they direct at LGBTQ people send a dangerous message – particularly to LGBTQ kids – about their equal dignity and worth.”

The Values Voters Summit is sponsored by the American Conservative Union, the NRA, and the FRC. The FRC has been designated a hate group by the Southern Poverty Law Center.

Pence may have accepted the speaking engagement as an opportunity to fire up Christian conservative voters before the 2018 midterm elections.

According to Washington Post, “In the last election, 81% of white evangelicals voted for Trump. That’s a greater share than supported George W. Bush in 2004, John McCain in 2008, or Mitt Romney in 2012.”

Vice President Pence says at the Value Voters Summit in Washington, D.C. that Senate Republicans will show "the utmost respect for all concerned" as the standoff over the Brett Kavanaugh sexual assault accusation continues. CBS/VIDEO pic.twitter.com/NF3o6IrQJe

Up until now, no other sitting vice president has attended the conference.

Will the evangelical GOP rally behind their own? Tony Perkins, president of the FRC, seemed to believe they should.

“He has systematically followed through on his promises, whether it is rebuilding our nation’s military, whether it is restoring religious freedom in the country,” Perkins said at the conference.

The FRC is backing Trump in a major way by launching a 12-state bus tour that will build up to a 90-minute national simulcast event the Sunday before the election. Organizers plan to discuss key issues and partake in group prayer.

“I do believe this fall’s election is challenging,” Perkins said. “But I do believe the values voters who are more in tune, and more astute, than they’re given credit for in the media know what’s at stake.”

Pence was credited with helping to convince evangelical Christians to back Trump’s presidential bid and, some might argue, could be the key to rallying the troops for Trump. What else could be expected from the man who believes God told him he’s the “president-in-waiting,” after all?

A “chosen” president-in-waiting who commented at the summit that accused sexual assailant, Supreme Court nominee Brett Kavanaugh, is “a man of integrity with impeccable credentials and a proven judicial philosophy.”

Pence added, “On the District of Columbia Court of Appeals, he wrote more than 300 opinions that reflect a strong record of support for limited government, religious liberty, and our Second Amendment. He’s a conservative who will interpret the Constitution as written and his record and career deserves the respect of every member of the United States Senate.”

Yankees to spend $50,000 on LGBTQ scholarships for Stonewall’s 50th anniversary