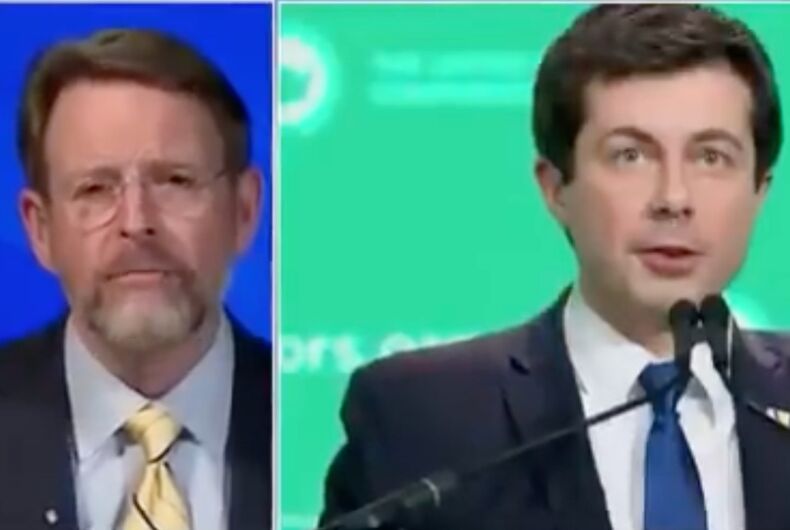 The religious right has gone apoplectic after Buttigieg pointed out that evangelical darling Mike Pence’s faith doesn’t align Christian teachings to love your neighbor and mind your own business. Over the last few months, Buttigieg has attacked Pence’s long history of anti-LGBTQ actions and statements.

Just this past week, he said, “That’s the thing I wish the Mike Pences of the world would understand, that if you have a problem with who I am, your quarrel is not with me. Your quarrel, sir, is with my creator.”

But Perkins – along with other religious right leaders – have identified Buttigieg as a threat and they’re going all out to attack him now. Buttigieg’s, a Christian, isn’t afraid to talk about his faith and he speaks the language of religious people – but also has the ability to point out that some far right leaders are more interested in political gain than saving souls.

“Scripture warns of wolves in sheep’s clothing coming and talking smooth, trying to be all things to all people. The reality is he’s advocating for policies that are not in line with the Scripture,” Perkins told Starnes. “You can talk about words. You can use the rhetoric of Scripture, but your policy has to match it.”

Buttigieg has pointed out that the Christian savior instructed his followers to care for the poor, immigrants, and prostitutes – something evangelicals have eschewed in favor of abortion, LGBTQ issues, and attacking asylum seekers and immigrants.

Buttigieg’s ability to paint marriage equality as a religious experience and that the Christian god is perfect and therefore made him gay, alarms the religious right who know he could sway those evangelicals disillusioned by their leaders gung-ho support for President Trump.

“The fact is, God does not create people that way. Now, there’s circumstances that lead one maybe down that path, and I’m not saying anyone would choose that lifestyle. But to say that they were made by God?” Perkins said. “First off, the science doesn’t back that up, and Scripture doesn’t back that up, because Jesus himself spoke to what marriage was. And Matthew also spoke to what gender was. I don’t hear Mayor Pete quoting that.”

“When you’re redefining god’s institution of marriage, you can’t claim to be carrying out the policies and principles of Scripture when you’re doing things that are 180 degrees from it.”