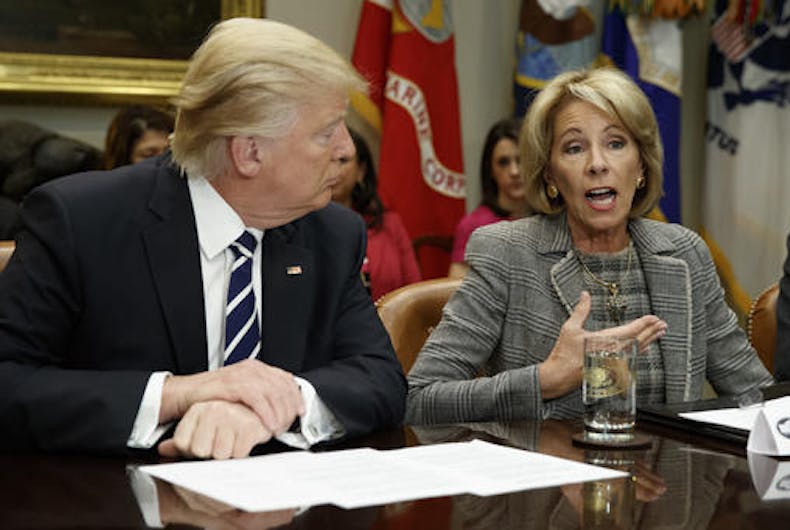 Secretary of Education Betsy DeVos said that she was aware of research showing how harmful her anti-transgender guidance two years ago was.

DeVos appeared before the civil rights subcommittee of the House Education Committee.

The subcommittee chair, Representative Suzanne Bonamici (D-OR) asked DeVos if she knew that “the stress of harassment and discrimination can lead to lower attendance and grades as well as depression and anxiety for transgender students” when she reversed Obama-era guidelines that told schools that discrimination against transgender students is illegal under Title IX.

At first, DeVos dodged the question with a vague statement that the Office of Civil Rights “is committed to ensuring all students have equal access to education free from discrimination.”

Bonamici pressed DeVos: “Sorry, I would really like answer.”

“Did you know, when you rolled back the guidance, that the stress of harassment and discrimination can lead to lower attendance and grades as well as depression for transgender students?” Bonamici asked.

“But I will say again that OCR is committed to ensuring all students have access to their education free from discrimination,” she added, even though she rescinded the guidance that said that anti-transgender discrimination is illegal at the federal level.

Bonamici also asked DeVos if she was aware of “alarming levels of attempted suicide among transgender youth.”

“I am aware of that data,” she responded.

“I’m troubled by Sec. DeVos’ answers to my questions during today’s hearing,” Bonamici said in a statement she issued later.

“The Department of Education has a responsibility to protect all students, but she acknowledged that she moved forward with a plan to rollback protections for transgender students despite knowing that it would put them at risk.”