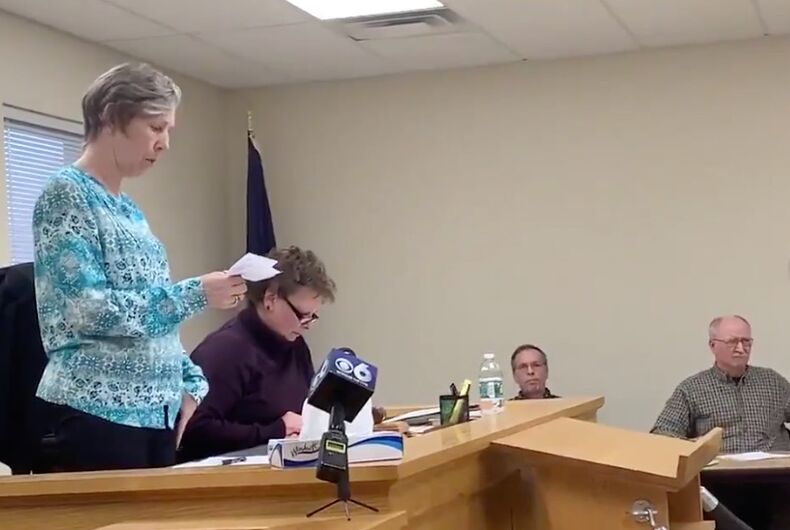 Sherrie Eriksen, the clerk for the small town of Root, New York, made national news when she refused to issue a marriage license to a gay couple in late 2018. Now she’s done something no other anti-gay clerk has done.

She has publicly apologized for her actions and the hurt they caused the community.

When Thomas Hurd and Dylan Toften applied for a license, Eriksen turned them away. She said they didn’t have an appointment and she opposed same-sex marriages based off her religious beliefs.

The denial ricocheted around the internet after Toften posted about it on social media. New York Governor Andrew Cuomo offered to perform their wedding ceremony and launched an investigation into the matter.

The town settled a lawsuit brought by the men for $25,000 and a public apology from Eriksen.

“It is my responsibility to provide marriage licenses to all couples, regardless of sex or sexual orientation,” said Eriksen during her apology. She stressed that no more licenses would be denied.

“She did acknowledge that there was an injustice done, and she’s vowed to make sure it doesn’t happen again, and that’s what this was all about,” Hurd said.

Toften and Hurd got a license in a different city. They are now married.

Town of Root clerk apologizes tonight 8 months after denying a gay couple their marriage license. The town has also reached a cash settlement with the couple. Hear from them tonight only on @CBS6Albany #MarriageEquality #LoveIsLove pic.twitter.com/e39x399HRK