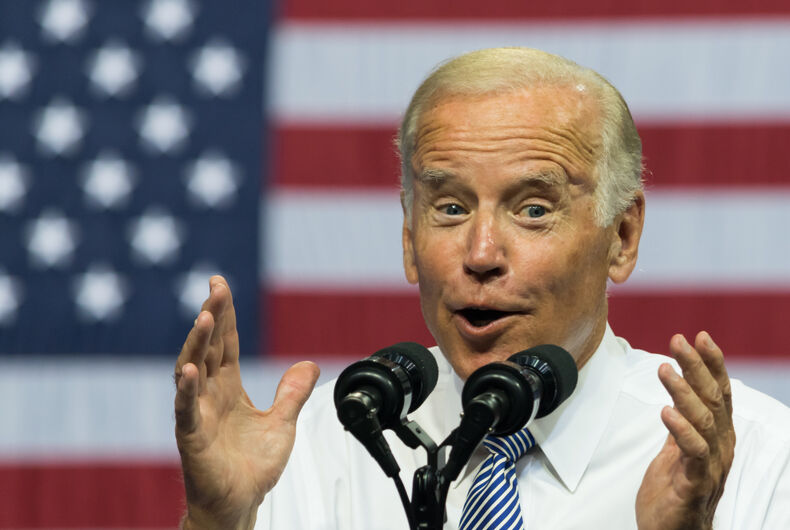 After months of broadly hinting (and apparently years of regretting not doing it sooner), Joe Biden has announced he’s running for the Democratic nomination for president. As Biden put it in his announcement email, “I cannot stand by.”

Biden comes to the race with a lot of advantages, starting with name recognition. For everyone who misses Barack Obama, Biden promises a return to the policies and sanity of the pre-Trump era. He has the potential to appeal to white working-class voters who defected to Trump in 2016.

Democrats think of him fondly, as the jovial uncle at the holiday gathering. For everyone who misses Barack Obama, Biden promises a return to the policies and sanity of the pre-Trump era.

But Biden also comes to the race with a lot of baggage. Biden ran for president twice before, and his campaigns never really went anywhere. He has a well-earned reputation for foot-in-mouth disease; he’s jokingly called himself “a gaffe machine.” We got a reminder just a few weeks ago when his old-style pol handsy style bumped up against the new reality of #MeToo, and Biden made a tone-deaf joke about it.

Then there’s Biden’s age. Should he win, he will be 78 on Inauguration Day – exactly double what Pete Buttigieg’s age will be. There’s no reason to doubt Biden’s energy level or health, but he will be taking on the hardest job in the world at a time most men his age would be happy to play a good game of pickleball.

More to the point, Biden comes to the race as a representative of everything the Democratic party has stood for over the past 40 plus years. Some of that is good, like the Watergate investigation (Biden was already in the Senate at the time) and the Affordable Care Act. And some of it is not good, like the establishment’s coziness with Wall Street in the face of rising income inequality and support for the war in Iraq (which Biden voted for).

Biden also has some personal episodes that won’t sit well in a woke age. For one thing, he refused to call corroborating witnesses when Anita Hill testified at Clarence Thomas’ confirmation that the then-Supreme Court nominee engaged in a pattern of sexual harassment. Biden says now that he regrets he didn’t do more, although he voted against confirming Thomas.

Nowhere is the change in the party’s stand over time more apparent than in LGBTQ issues.

As vice president, Biden famously forced the White House to accelerate its support for marriage equality when he blurted out his support for it without any prior warning to the White House. The moment was quintessential Biden: spontaneous, but also heartfelt.

He changed his stand when he attended an event hosted by a gay couple with children.

“I look at those two beautiful kids,” Biden said. “All you got to do is look in the eyes of those kids. And no one can wonder, no one can wonder whether or not they are cared for and nurtured and loved and reinforced.”

Biden was also instrumental in the repeal of Don’t Ask, Don’t Tell. He supported allowing transgender people to serve in the military. It’s fair to say that Biden was really the man who did the most for LGBTQ rights in the Obama era.

Which shows just how far Biden–and Democrats–have come. The Biden who steered the repeal of Don’t Ask, Don’t Tell through Congress is the same Biden who voted for it in 1993. Ditto for the Defense of Marriage Act. As Senator he also voted for a ban on immigrants from HIV from coming to the U.S., which Obama eventually lifted.

The question facing Democrats is how much they want to replay the past and how much do they want a totally fresh start. Buttigieg’s momentum, despite his lack of experience, suggests that some voters just want someone new. Do you want a candidate who has evolved or who is from an era where the evolution was taken for granted?

One of the raps against Hillary Clinton was that she was a throwback to the 1990s. Biden goes back 20 years before that.

Of course, the Democrats just want to win the White House back and kick Trump to the curb (and to the of not-so-tender mercies of the Southern District of New York’s prosecutors). Experience in a national campaign, let alone several, gives Biden an advantage that only Bernie Sanders (another septugenarian) can began to approximate.

Maybe Biden’s time has passed. But maybe his time is now.