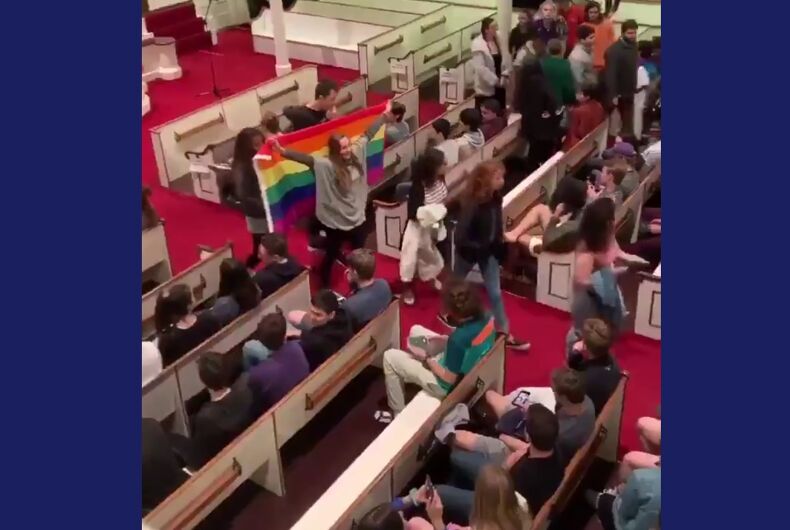 Students walked out of the chapel at Amherst College 10 minutes into Jeff Sessions's speech.Photo: The Amherst Student/via Twitter

Over 100 students walked out of a speech given by former Attorney General Jeff Sessions at Amherst College in Massachusetts.

Sessions was invited by the Amherst College Republicans to bring a “diverse perspective” to the campus.

About ten minutes into his speech at a campus chapel, students walked out en masse, carrying a rainbow flag.

The protest was organized by Amherst College Direct Action, and students could be heard chanting outside.

Among the protestors was economics professor Jessica Reyes, who held a sign that said, “Jeff Sessions is a crime against humanity.”

Sessions was bothered enough by the protest that he mentioned it during his speech, saying it was a sign of the “echo chamber of political correctness” on college campuses.

“A good college that has no intellectual diversity is not a healthy place. It’s too close to indoctrination to suit me.”

It’s not surprising that students flew the rainbow flag during the protest. Sessions has a long history of anti-LGBTQ statements and actions.

As a Senator, Sessions earned a consistent “0” rating on HRC’s Congressional Scorecard because he opposed all efforts to advance LGBTQ equality, including hate crimes and anti-discrimination laws.

As attorney general, he was instrumental in rolling back protections for transgender students and worked with anti-LGBTQ hate groups to start a “religious liberty task force.”

Even his current defense of “intellectual diversity” on college campuses – which he, unironically, brought up to denounce a student protest – rings hollow.

In 1996, as the attorney general of Alabama, he asked a court to block the University of Alabama from hosting the Southeastern Lesbian, Gay, Bisexual College Conference.

He wrote a letter to the university’s president arguing that the event violated state law that bans schools from promoting “actions prohibited by the sodomy and sexual misconduct laws.” In the letter, he said that there are limits to free speech.

“The State of Alabama will experience irreparable harm by funding a conference and activities in violation of state law,” he argued before a judge who ultimately ruled that the state law was “viewpoint limitation” that violates the First Amendment.

Is Joe Biden the best choice for LGBTQ Democrats?