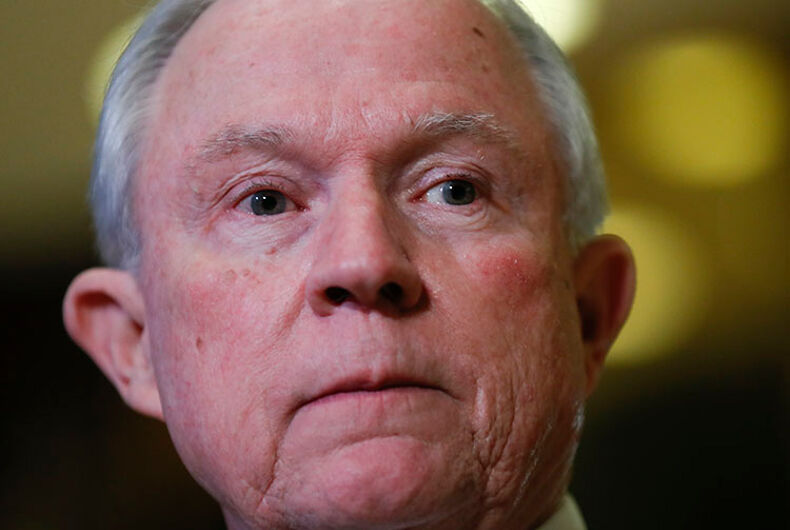 Sen. Jeff Sessions, Donald Trump’s pick for U.S. attorney general, has a track record of opposing LGBTQ equality, including trying to block a conference on LGBTQ issues at University of Alabama in 1996, CNN reports.

Then Alabama’s attorney general, Sessions tried to bar the Southeastern Lesbian, Gay, Bisexual College Conference from meeting on campus, citing the state’s “no promo homo” law, which prohibited public funds from being used to promote “actions prohibited by the sodomy and sexual misconduct laws.”

While Sessions stopped short of taking legal action, despite the support of then Gov. Fob James, he encouraged the university to stop the event. The conference was scheduled to include a discussions on coming out, religion, STDs, and substance abuse.

“This is a matter that the university and board of trustees need to deal with,” Sessions told the Mobile Register at the time. “I don’t see how it can be done without canceling this conference.”

When the university responded by saying that they would “err of the side of the First Amendment,” Session took his opposition a step further, suggesting he would obtain a court order to stop the conference.

Shortly thereafter,US District Judge Myron Thompson struck down as unconstitutional the 1992 law Sessions was using to justify his crackdown on the gathering, calling it a violation of the First Amendment and “an open effort by the State Legislature to limit the sexuality discussion in institutions of higher learning to only one viewpoint: that of heterosexual people.”

But Sessions was undeterred.

“I intend to do everything I can to stop that conference,” Sessions told the Huntsville Times.

He sought, and was denied, an injunction. And Sessions even tried to make a case for “monitoring” the conference for violations, arguing that it would cause “irreparable harm.”

In the end, Sessions’ vocal opposition to the conference likely had the effect of increasing attendance.

“I feel like Jeff Sessions used the full power of his office position to deny a student group the right to have a conference,” conference organizer Cathy Lopez Wessel told CNN. Still, she said, “It was probably better attended than it would have been. So, in some ways what they did backfired.”

Sessions has a long history of opposing LGBTQ rights, opposing measures to include sexual orientation in hate crimes legislation in 2000 and 2009 and calling the Supreme Court’s 2015 marriage equality ruling an “effort to secularize, by force and intimidation.” He also co-sponsored the First Amendment Defense Act, which would legalize discrimination against LGBTQ people.
News (USA)
Alabama, First Amendment, Jeff Sessions, no promo homo

Michigan neighbors fly rainbow flags to drown out the hate