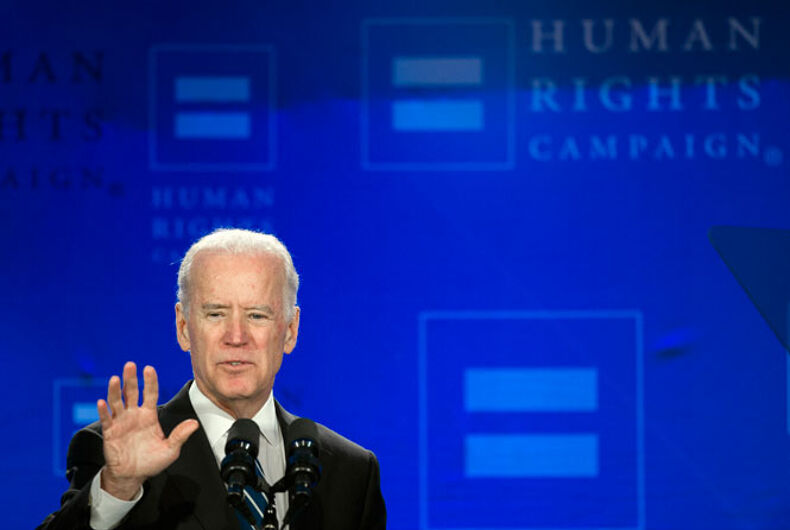 “I hope this ceremony serves as a testament to the strides we’ve made for equality and inspires us to imitate Joe Biden in our support for the LGBTQ community,” DNC Chairman Tom Perez said in a statement about the June 21 dinner. Biden will headline the event.

Biden has long been an advocate for LGBTQ rights, and as a result has received support from the community. Here, we highlight some of the times Biden was on our side.

While Biden didn’t initially support same-sex marriage, he evolved much quicker than some others. He voted in 2006 against a constitutional ban. Arguably the most important move he made on the issue came not with a vote, however, but by using his voice and the power of his position as vice president to publicly state he was in support of same-sex marriage.

Biden made the statement on May 6, 2012, during an appearance on Meet the Press, where he said he was “absolutely comfortable with gay marriage.

Obama came out in support of marriage equality three days later. Now it is the law of the land.

2. Voted in favor of LGBTQ rights while in the Senate

Biden not only voted against a constitutional ban on marriage, he also voted for hate crime protections for the LGBTQ community, as well as protections against employment discrimination.

Those years of support show that Biden was not simply interested in standing up for LGBTQ rights when it was most popular to do so, but rather that it is something he has long believed to be an integral part of a functioning democracy.

In 2012, during a visit to a Florida field office, called transgender discrimination “the civil rights issue of our time.”

Biden threw his weighty support behind transgender military personnel being able to serve openly during the debate within the Obama administration on whether or not to lift the longstanding ban. In the end, the Pentagon did decide to allow trans soldiers to serve openly.

“No longer is there any question transgender people are able to serve in the United States military,” he said at the Human Rights Campaign’s 2015 gala, where he also once again called the struggle for trans rights “the civil rights issue of our time.”

Biden performed his first wedding in August of last year, and it was a same-sex couple, whom he married at the Naval Observatory, the vice president’s official residence.

He joined Joe Mahshie and Brian Mosteller in union, both of whom were longtime White House aides. More proof that Biden walks the walk.

Biden spoke out against the abuse of gay and bisexual Chechen men, becoming one of the first politicians to do so, in mid-April.

Chechen men are reporting that they have been taken to secret prison sites, electrocuted and otherwise physically assaulted, with demands to give up the names of other gay and bi men, with some dying at the hands of their captors or their own families.

Biden said he was “disgusted and appalled” by the reports, adding, “I hope that the current administration lives up to the promises it has made to advance human rights for everyone by raising this issue directly with Russia’s leaders.”

While U.N. Ambassador Nikki Haley has condemned the reports on behalf of the Trump White House, Trump has yet to speak out on the issue.

Honorable mention: His love of this Obama-Biden Bromance meme

Remember those Obama-Biden bromance memes that were all the rage toward the end of the pair’s eight years together in the White House as a dynamic, lawmaking duo? Turns out, Biden saw those too, and he even had a favorite one.

It just so happens, of all the options he could have chosen, Biden revealed that his favorite was one of the most homoerotic ones:

Why does something so silly matter? Because it shows that he is comfortable enough in his heterosexuality to laugh at a joke centered around his sexuality.

It’s hard to imagine another vice president embracing a joke that suggests he has a romantic crush on the president. Certainly not Pence.

A horrible end for the transgender wife of a troubled chef

Swipe right on this dating app for everyone Grindr forgot