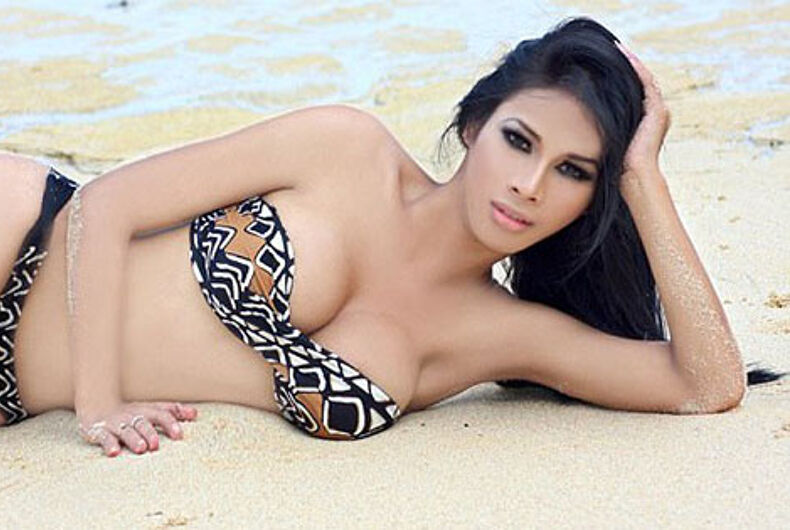 EDITOR’S NOTE: The details below are gruesome, and may be too disturbing for some readers. Please consider this before reading on.

What began as an incident of domestic violence ended with a transgender woman chopped into pieces and cooking on a stove. Now, an Australian magistrate is investigating police conduct in the bizarre murder-suicide from 2014.

Police say Marcus Volke, a chef in Brisbane was heard arguing with his wife, Mayang Prasetyo, in their Teneriffe apartment just two days before he called an electrician for a house call.

Prasetyo is described in reports as a sex worker from Indonesia who married Volke in Copenhagen in 2013 to get an Australian visa. In return she helped pay off his $9,000 credit card debt with her escort earnings.

“Yeah I got a bit of a problem,” Volke said in the call to the electrician, as reported by the Daily Mail.

Um, I was cooking on my stove, it’s an electric stove and the stock pot boiled over, dripped down and got into the oven and basically made this big bang and then all the power turned off. Does it sound like something you’d be able to fix today?

When repairman Brad Coyne arrived, he said he was confronted by a putrid smell, which Volke explained was the result of his cooking. “You’ll have to mind the smell, I’m cooking pig’s broth,” the killer said.

We went into the bathroom which had laundry in it and there was a cupboard that had the washing machine in it – which I didn’t know at the time had bits of his wife’s body in it, like her head and arms.

Coyne was still suspicious and so he alerted police. At the same time, building managers called police because of the smell, which neighbors described as “rotting meat.”

When Constable Liam McWhinney and Senior Constable Bryan Reid arrived, they said Volke was cooperative and so they didn’t suspect anything out of the ordinary, according to Gay Star News.

But when they asked to search his apartment, Volke told them he first needed to secure the couple’s dogs and locked the door behind him.

That’s when he reportedly slit his own throat and then leaped from his balcony, running away.

Police later discovered him dead in an industrial dumpster.

Inside the apartment, the constables reportedly found the evidence Volke had murdered his wife.

They found a pool of blood on the floor next to the fridge and, next to it, a large cooking pot that contained what turned out to be Prasteyo’s feet.

“Originally I thought it was some sort of sick prank,” McWhinney told the inquest into their investigation. “Halloween or something — when I put two and two together, I realized it wasn’t a prank.”

The rest of Prasetyo’s dismembered remains were found in a bag in the washing machine. Reid said the apartment smelled terrible, like something “I hadn’t smelled before.”

Investigators later learned Volke had a history of depression, anxiety, and a sleep disorder.

The Daily Mail reported Volke was worried Prasetyo would expose his double life as a gigolo.

Volke’s death was unavoidable and the actions of attending police were “authorized, justified and supported” by law, attorney Emily Cooper told the magistrate. “It’s clear that there was no misconduct displayed by any of the officers involved,” she said. “There was nothing further that they could have done at the time.”

When are you black enough to sue for racial discrimination?