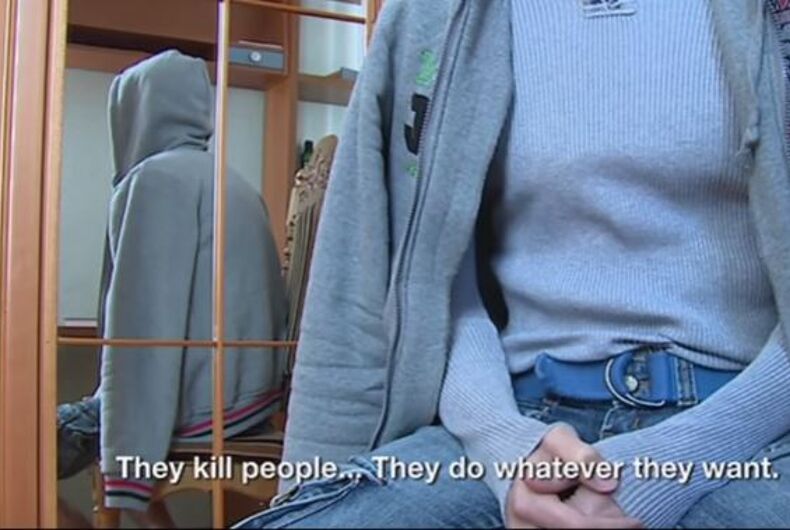 A survivor of the Chechnya prison camp describes his experiences. Photo: Screenshot, France

More survivors of the secret prisons, where LGBTQ people are tortured, humiliated, interrogated, and killed, are speaking out about the horrors going on inside Chechnya.

While Chechen officials continue to deny the reports, it is clear from accounts such as those you will see in the video below that life as an LGBTQ person in the Russian controlled region is highly dangerous. While this has long been the case, the situation has gotten worse, with an unprecedented roundup of gay and bisexual men taking place.

According to the British government, Chechnya’s president, Ramzan Kadyrov, plans to eliminate the LGBTQ community by the start of Ramadan, less than a month away.

As we previously reported, survivors have outlined abuses including electrocution and beatings, and shared that when and if they are brought back home, their families are told they should murder them in an honor killing.

Now we have a man who made it out alive sharing that sometimes families are invited to the prison sites and told to kill their relative, or else the authorities will do it themselves.

“They tell the parents to kill their child,” said the man, whose identity has been protected over fears for his safety. “They say, ‘Either you do it or we will.’ They call it, ‘Cleaning your honor with blood.'”

“They tortured a man for two weeks,” he continued. “They summoned his parents and his brothers who all came. They said to them, ‘Your son is a homosexual. Sort it out or we’ll do it ourselves.’ They replied, ‘It’s our family, we’ll do it.’ The family took him and killed him in the forest. They buried him there. They didn’t even give him a funeral.”

The man said that if he were to go home, he believes his family would do likewise, leaving him to suffer the same fate.

“We’ve always been persecuted, but never like this,” the man said. “Now they arrest everyone. They kill people. They do whatever they want. They know that nobody will come after them. Because the order has come from above to ‘cleanse the nation’ of people like us.”

The new House of Cards trailer has a bisexual twist