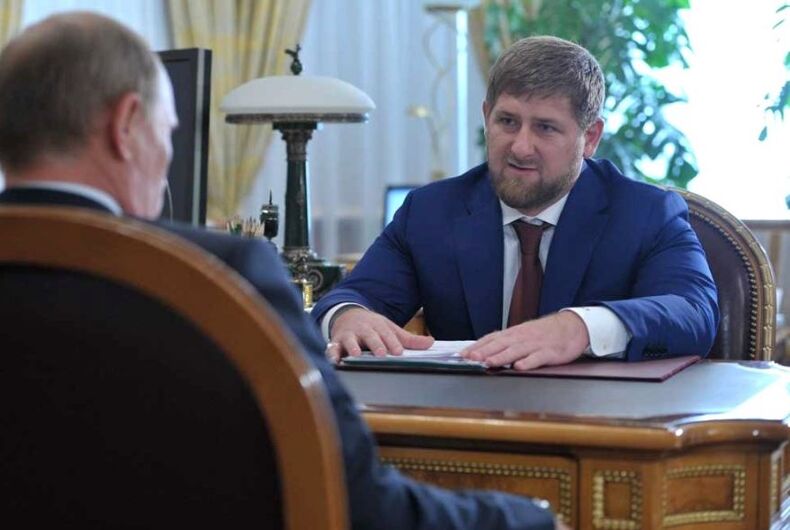 Reports of the imprisonment, torture, and killings of gay and bisexual Chechen men have become widespread as more victims are coming forward to speak out. Now, according to the British government, Chechnya’s president, Ramzan Kadyrov, plans to eliminate the LGBTQ community by the start of Ramadan, May 26 this year.

“Sources have said that he wants the [LGBT] community eliminated by the start of Ramadan,” Alan Duncan, Minister of State for Foreign and Commonwealth Affairs, told parliament, Pink News reports.

“Human rights groups report that these anti-gay campaigns and killings are orchestrated by the head of the Chechen republic, Ramzan Kadyrov,” Duncan added. “He has carried out other violent campaigns in the past, and this time he is directing his efforts at the LGBT community.”

Officials at the Foreign Office verified to Pink News that President Kadyrov had made the threat in local Russian language media, seen by the UK government.

Kadyrov has denied the reports, and his spokesperson even went so far as to deny that gay and bisexual men even exist in Chechnya at all.

Kadyov said on social media that international organizations are conducting a “massive information attack…using the most unworthy methods, reality is distorted, attempts are being made to blacken our society, lifestyle, traditions and customs.”

Russian President Vladimir Putin, himself far from a friend to the LGBTQ community, has also claimed the Kremlin found no evidence of the arrests and torture of gay and bi men.

Russian newspaper Novaya Gazeta broke the story, and Human Rights Watch has verified the accounts given by men who were abducted and abused, and asked to give the names of other gay and bisexual men.

The LGBTQ community in the region has been forced to remain primarily closeted, meeting on social media sites and in chat rooms. Those same methods are now being used to make contact with queer men, who are then subject to horrific abuses.

The reports have been condemned by most Western governments, including by the Trump administration.

One man is said to have died as a result of the torture, and two others were murdered by their families in honor killings after police finally returned them to their homes, The New York Times reports.

The Times spoke with a survivor in his 20s calling himself Maksim said agents used a friend to lure him to an apartment where others rounded up by the same ruse were also held. He was then severely beaten and interrogated. When he was brought home, police encouraged his male relatives to kill him if they had any honor. His father only stopped himself from beating him when Maksim showed him his injuries.

“I should kill you,” his father said.

Maksim said he refused to give up any names, despite being severely beaten, including being tied to a chair and electrocuted.

“It was unbearably painful,” he said. “I was hanging on with my last strength.”

The Times also spoke with two other gay men detained by Chechan security agents, and their accounts match those being told by others.

“If beating you with their hands and feet is not enough, they use electric shock,” a man calling himself Ruslan told the BBC. “They have a special black box and they attach wires to your hands or ears. The pain is awful. It’s terrible torture.”

He too resisted demands to give up names of other gay and bi men.

“They used to detain people before all the time to blackmail them,” he said. “Now [the aim] is the extermination of gay men, so that there are none left in the republic.”

The Russian LGBT Network is working to get victims and potential victims out of Chechnya, but it is not an easy task, as they often fear this is another trap.

“These people don’t trust anybody,” Olga Baranova, director of the Moscow Community Center that is part of the network, said. “They say, ‘We didn’t believe you were real. We thought this was the last effort to round up whoever was left.'”

Canadian group Rainbow Railroad is also working to get people out of harm’s way in the country.

Meanwhile, the staff of the newspaper that broke the story,  Novaya Gazeta, fear for their safety as well, having received numerous threats since first reporting on the situation.