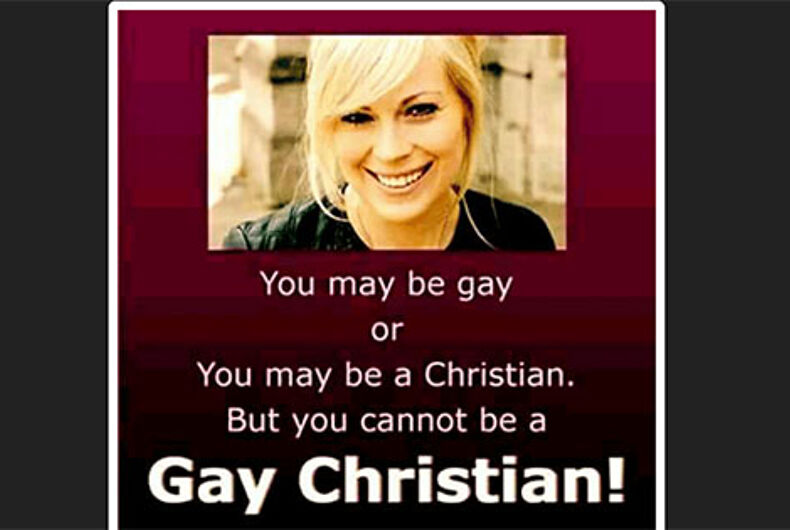 For Christian rock musician Vicky Beeching, antigay harassment is nothing new. She’s experienced it off and on since coming out publicly in 2014. But a recent viral meme featuring Beeching’s face has the artist and advocate taking a break from social media.

The meme includes a photo of Beeching and the words: “You may be gay, or you may be a Christian. But you cannot be a gay Christian!” It’s been shared about 20,000 times.

When anti-gay material with your face on it gets shared almost 20,000 times, you know society still has a long way to go towards equality.

The viral meme appears to have originally been created and posted by a Facebook user on a page called “Seek and Save the Lost” back in 2014.  Its recent viral resurgence appears to be thanks to a housewife from Frankfurt who posts multiple faith-related memes a day, and first shared her version of the post back in February.

“I think it was the number of shares that made it significant,” the London-based worship leader and LGBTQ activist told Christian Today. “I see that kind of stuff all the time but that number caught me off guard.”

What made it worse, Beeching said, was knowing that many of the people who shared the hateful post likely identify as Christians.

“The thing that took me by surprise was that 20,000 Christians took the trouble to click ‘share,'” she said. “I think the church is changing but seeing a figure like 20,000 caught me off guard.”

Beeching told PinkNews she made the mistake of reading the comments.

“It’s never fun to follow rabbit-trails across the internet and find threads full of hundreds of people discussing what they imagine you get up to behind closed doors; hypothesising about your sex life, or mocking you for the lack of a sex life (criticised either way); and using the most gross and vulgar terms. And saying your faith is a lie,” she said. “And suggesting you’d be better of ‘taken out’ so you couldn’t influence anyone anymore to ‘live a life of sin’ by being LGBT.”

This slap in the face came shortly after Beeching says she received a 7-page handwritten letter telling her she’s “headed to hell” and that she must make a U-turn to get off “the path of wrath” and “repent from the sin of lesbianism.”

I checked my Po Box & got a seven page, handwritten letter telling me to "repent from the sin of lesbianism". 🙄😣 Who has time to hand-write SEVEN pages?!

Beeching said she’ll check direct messages occasionally, but otherwise, she’s taking a few weeks away from all the hate.

Hundreds of thousands raise awareness of bullying by silencing their voices