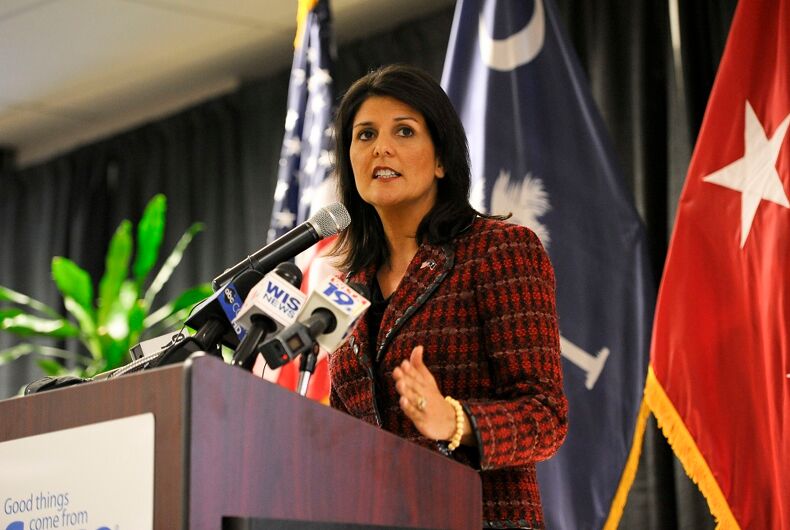 The office of Nikki Haley, the US Ambassador to the United Nations, released a statement about reports that gay and bisexual men are being arrested and held in detention sites in Chechnya.

We continue to be disturbed by reports of kidnapping, torture, and murder of people in Chechnya based on their sexual orientation and those persecuted by association. If true, this violation of human rights cannot be ignored – Chechen authorities must immediately investigate these allegations, hold anyone involved accountable, and take steps to prevent future abuses.

We are against all forms of discrimination, including against people based on sexual orientation. When left unchecked, discrimination and human rights abuses can lead to destabilization and conflict.

The Russian newspaper Novaya Gazeta reported earlier this month on the detention sites using testimony from gay people. Many of the people sent to the sites were arrested in sweeps where a law enforcement official would pose as a gay person looking for sex online.

The newspaper said that over 100 gay and bisexual men are being held in such sites, and that at least three have been tortured to death.

A spokesperson for Chechnya’s leader Ramzan Kadyrov responded last week, “You cannot arrest or repress people who just don’t exist in the republic.”

Earlier this week, Kadyrov lashed out at human rights organizations over the accusations, calling the reports a “massive information attack… using the most unworthy methods, reality is distorted, attempts are being made to blacken our society, lifestyle, traditions and customs.”

Joe Biden condemned the reports yesterday, and rallies were held over the weekend to denounce the alleged detentions sites.

Chechnya is a Muslim-majority republic in the Russian Federation with a population of 1.4 million.

Thief steals church’s rainbow flag, replaces it with a different one