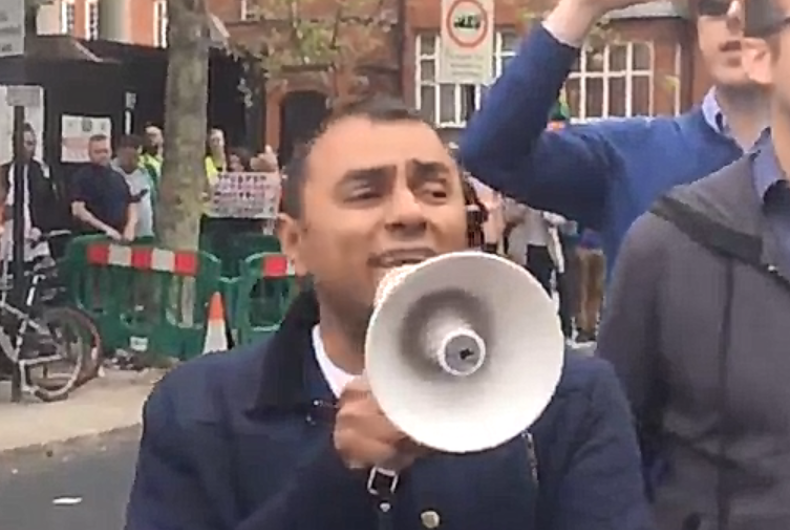 One protestor said in a speech, "When you look across the world, so many people are still being tortured and imprisoned."Photo: Screenshot/Twitter

Hundreds of activists gathered outside the Russian embassy to protest gay and bisexual men reportedly being tortured in secret detention sites in Chechnya.

Protesters were responding to reports that over 100 gay and bisexual men have been rounded up in Chechnya, a part of the Russian Federation. At least three of the men were tortured to death.

The Russian newspaper Novaya Gazeta reported earlier this month on the detention sites using testimony from gay people. Many of the people sent to the sites were arrested in sweeps where a law enforcement official would pose as a gay person looking for sex online.

Journalist Elena Milashina, who broke the story, revealed to the BBC that she has been forced into hiding, and spoke from a secret location, according to PinkNews.

On April 3, in the biggest mosque in Grozny, 15,000 people came together and declared a Jihad on us… not just me personally, but all journalists at Novaya Gazeta.

They said the people at the newspaper who raised this question have damaged the honour of Chechen nation and should be prosecuted.

We know about four secret prisons. Two of them in the capital of Chechnya, Grozny, one of them in Argun – this is the first secret prison we discovered where LGBT people were detained, beaten, tortured and killed.

We got this information [a few] weeks ago and began to prove it. It’s pretty hard in Checnya, especially to rescue LGBT people, because they’re a very closed network. The region is very hard on those people and they have to hide.

The Chechen government denied [the allegations], although they don’t deny that if they found this kind of people in Chechnya they would be killed.

They don’t deny this, but they deny the secret camps and they have denied that they detained more than 100 people and killed some of them.

The conditions at the detention sites were described in Milashina’s article in horrific detail. One person told the newspaper:

In order to get the confession, they beat him with a hose and tortured with electricity. He reported that about 30 people were locked in the same room together with him. According to him, the security officials themselves stated that the order came from the leaders of the Republic. The detained were forced to share the contacts of other gay men.

Around 400 protesters went to the protest with flowers, wreaths, and pink triangles. Many had signs expressing solidarity with the victims.

One protester, Damien Arness Dalton, said, “Clicktivism and sharing news articles aren’t enough of a response to these atrocities, beatings and torture camps. We will always face homophobia and it’s time we acted as a global community to ensure our voices are not silent. To think it could be any one of us in [those camps] breaks my heart. Our geographical privilege shouldn’t blind us to the sexual freedoms we enjoy – or our unity with those who do not.”

Other protesters stressed the similarities between Russia’s and the United Kingdom’s positions in the history of violence against LGBTQ people. “We want our voices to be heard by Theresa May as well as by Vladimir Putin,” Vyvian Manning told The Independent. “Over half of the countries where gay sex is illegal are former British colonies, often using laws introduced under British rule.”

One powerful speech was caught on video:

A spokesperson for Chechnya’s leader Ramzan Kadyrov responded earlier this week, “You cannot arrest or repress people who just don’t exist in the republic.”

A spokesperson for Russian president Vladimir Putin who at first said he could not confirm the reports because “I’m not an expert in the field of non-traditional sexual orientation,” added a new comment Friday, saying the Kremlin does not have confirmed information on the targeted violence.

“We do not have any reliable information about any problems in this area,” Dmitry Peskov told journalists on Friday.

Both the U.S. State Department and the United Nations have deemed the reports credible enough to respond to. Also, the Russian office of Amnesty International on Friday called on authorities to investigate human rights violations in Chechnya, which is a Muslim-majority nation.

Amenesty International also expressed concern about the threats against Milashina. It said Chechen elders and clergymen reportedly held a meeting several days after the newspaper article and threatened retaliation against those who “insulted the centuries-old foundations of Chechen society and the dignity of Chechen men.”

The group said it “considers this resolution as a threat of violence against journalists.”

Sean Spicer’s ignorance about the Holocaust is dangerous