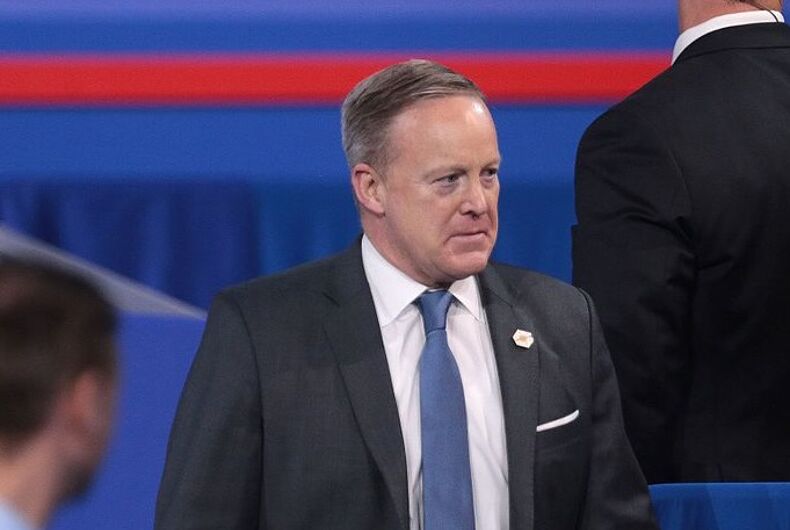 We did not use chemical weapons in World War II. You had someone as despicable as Hitler who did not even sink to using chemical weapons. If you are Russia, ask yourself, is [Syria] a country and regime that you want to align yourself with?

When reporters asked White House Press Secretary Sean Spicer to clarify his remarks at his press briefing, Spicer only stuck his foot deeper into the muck by asserting: “When it comes to sarin gas, [Hitler] was not using the gas on his own people the same way that Assad is doing,” and he went on to refer to Nazi concentration camps as “Holocaust centers.”

By the 8th grade, most students learn that the Nazis gassed (with hydrogen cyanide in the form of Zyklon B) countless numbers of Jews and others they defined as undesirables and less-than human. And, yes, Mr. Spicer, many of those gassed were Hitler’s “own” German people!

In addition to the concentration camp gas chambers, which murdered millions, the Nazis used gas vans, which they referred to as “Gaswagen” – a mobile vehicle used as a gas chamber. It had an air-tight compartment into which exhaust fumes were pumped while the engine was running. It took victims on average 20 minutes to die a torturous death by poisoning and suffocation.

After releasing three twisted and confusing written statements attempting to further clarify what he meant at the press briefing, Spicer finally admitted to his blunder and gave a full-throated apology.

Not only was Spicer’s statement on his perceived differences between Adolf Hitler and Bashar al-Assad insensitive and offensive, it represents an administration known to run hard and lose with (alternative) facts.

Donald Trump admitted to The Washington Post that he does not read: “I never have. I’m always busy doing a lot. Now I’m more busy, I guess, than ever before.”

Rather than concern himself with the Three R’s, Trump relies on the Three I’s when making decisions: Impulsiveness, Instinctiveness, and Intuition. He has never read a biography of any of our past presidents, and his grasp of U.S. and world history is slight at best.

Trump’s de-emphasis on education is reflected in his choice of highly controversial billionaire Betsy DeVos to head the U.S. Department of Education. DeVos has for a voucher system that would divert funding from public schools to private and parochial schools, and give greater emphasis on for-profit charter schools. Recently, she has been charged with plagiarism. At her Senate confirmation hearings, she was roundly criticized for her lack of even basic knowledge on teaching and pedagogical issues that college sophomore education major would know.

While knowledge is power, ignorance is dangerous, even deadly for those with enormous power.

“Now, I have to tell you, it’s an unbelievably complex subject. Nobody knew health care could be so complicated,” Trump said at a meeting of governors.

Wrong, Mr. President, everyone who actually studied the issue knew perfectly well how complex and complicated it is.

Before meeting with Chinese President Xi Jinping this month, Trump assumed that China could easily restrict North Korea’s nuclear program. But Trump told The Wall Street Journal: “After listening [to Xi Jinping] for 10 minutes, I realized it’s not so easy. I felt pretty strongly that they had a tremendous power [over] North Korea…. But it’s not what you would think.”

Well, again Mr. President, it may not be what you would think, but people who have studied the history of Chinese-North Korean relations know how complex their relationship is. If you had done your homework instead of depending on the leader of China to give you a crash course in history, then you might have been better prepared to fulfill your duties.

Instead, your lack of knowledge and little apparent interest in learning even the fundamentals surrounding the issues in domestic and world affairs that you must tackle, combined with your enormous power imperils not only your country, but nations across the globe.

So, what kind of role model does this president give young people on the value of inquiry, of learning, and of education itself?

Hundreds protest outside Russian embassy for gay men in Chechnya