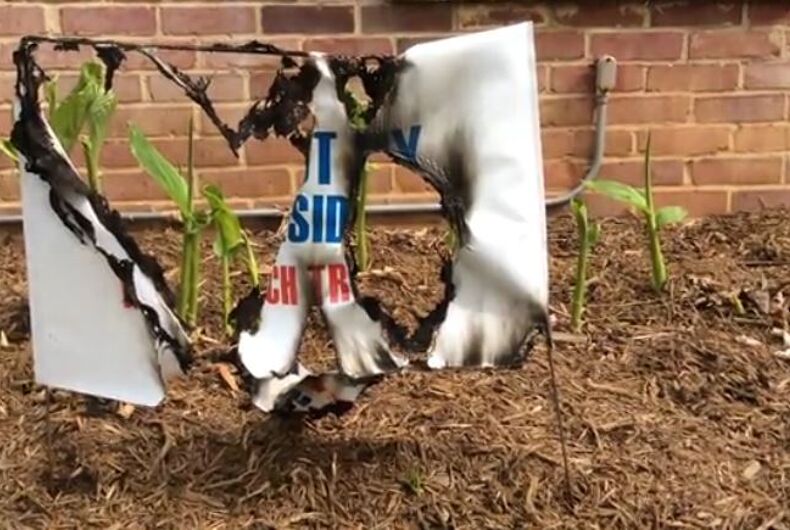 Yard signs against President Donald Trump and in support of immigrants and refugees were burned in a neighborhood in Durham, North Carolina, upsetting residents.

“I was kind of shocked,” said Susan Orovitz, whose neighbor woke her Thursday morning by banging on her door to tell her the sign in her yard reading “No matter where you are from, we’re glad you’re our neighbor,” in Spanish, English, and Arabic had been set ablaze, reports Raleigh’s News & Observer.

Another resident of the neighborhood, Beverly Tucker, smelled what she thought was a campfire as she left her house, until she looked down and saw that her sign had been burned to a crisp, melted pieces falling off.

“He’s not my president. Impeach Trump,” it had read.

Her “glad you’re my neighbor sign,” like Orovitz’s, had also been reduced to little more than the metal frame.

Another “Impeach Trump” sign in yet another neighbor’s yard was also set on fire.

Related: Someone in a small Wisconsin town is stealing & burning pride flags

“Part of being an American is being able to have freedom of speech. That’s a right,” Tucker said. “You may not agree with what I say, but I have the right to say it. And you have a right to disagree. But you don’t have a right to come on my property and destroy stuff.”

“The fact that this person decided that their opinion trumped mine, so to speak, I think is wrong,” she added.

She is not deterred, saying she plans on buying more signs to put in her yard.

As the Raleigh & Observer notes, shortly after the election, someone spray-painted, “Black lives don’t matter does your votes” [sic] on a wall in downtown Durham.

Hundreds protest outside Russian embassy for gay men in Chechnya