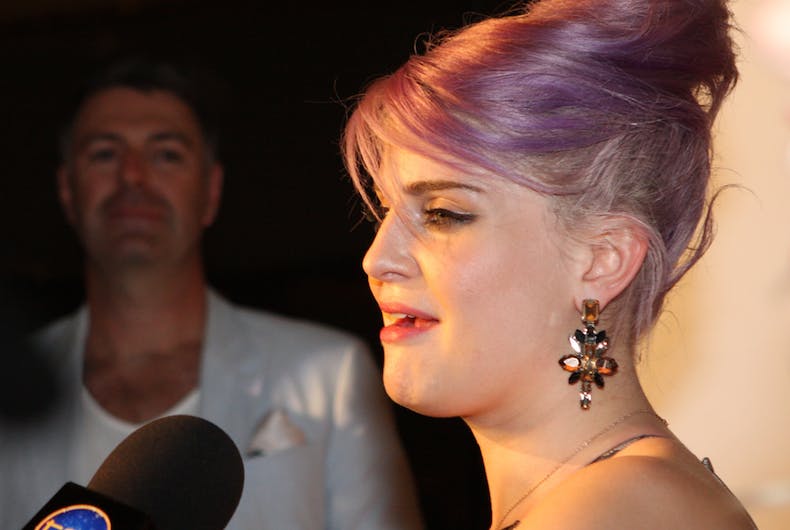 Kelly Osbourne is what you might call “culturally queer.” Growing up around rock stars and drag queens, the 32-year-old daughter of Ozzy and Sharon and a performer in her own right, she came to consider the LGBTQ community family — even if she can’t claim membership.

“I don’t remember a time in my life when I haven’t been submerged in the LGBT community,” she recalled in an interview with Between the Lines. “It’s the only community that, even though I shouldn’t have belonged, accepted me. It was the only world I ever really felt comfortable in, because, and I say it in my book, I don’t know what it feels like to fit in.”

That experience — including having her mom sneak her into drag shows as a preteen — has shaped her view of the world.

“I think drag queens choose how they want you to see them and they do that knowing that they’re probably going to get a lot of shit for it, and that’s what magic is,” Osbourne said. “That’s like, ‘Fuck you, this is who I am,’ and you can wake up every day and be whoever you want to be. I love that.”

Despite her early exposure to queer culture, Osbourne is disappointed to say she isn’t gay — except in the way that everyone is.

“You know my honest opinion? Everybody’s gay. It is a strictly human thing. You can’t put a gender on love,” she said. “I’m open to loving anybody. It’s about the person. I don’t think it’s about sexuality at all.”

Still, Osbourne said there’s a difference between being open to a relationship with a woman and being a lesbian. And she gets irritated when young, female celebrities claim to be gay just to get attention.

“There’s this whole generation of young Hollywood girls who can’t find love where they think it’s supposed to be, and then they come out being gay and two weeks later they have a boyfriend. It drives me nuts!” Osbourne explained. “I think it takes all the proactive work the LGBT community has done and sets them back. Oh, so now you’re gay? Then two weeks later: ‘Oh no, that was just a phase.’ You don’t get to do that.”

She wouldn’t name names, noting that “outing somebody in that way is just as bad as outing somebody who has not come out of the closet.” But her time spent advocating for the LGBTQ community has made her protective.

“I’ve marched till my feet bled for the right of equal love in the gay community, and you’re just gonna step in because it looks cool for you and now tell everybody that you’re a lesbian when you’ve never even seen another puss that’s not yours so you can get attention?” Osbourne said.

For her part, though she’s never dated a woman, she remains open to the possibility — just like her mom.