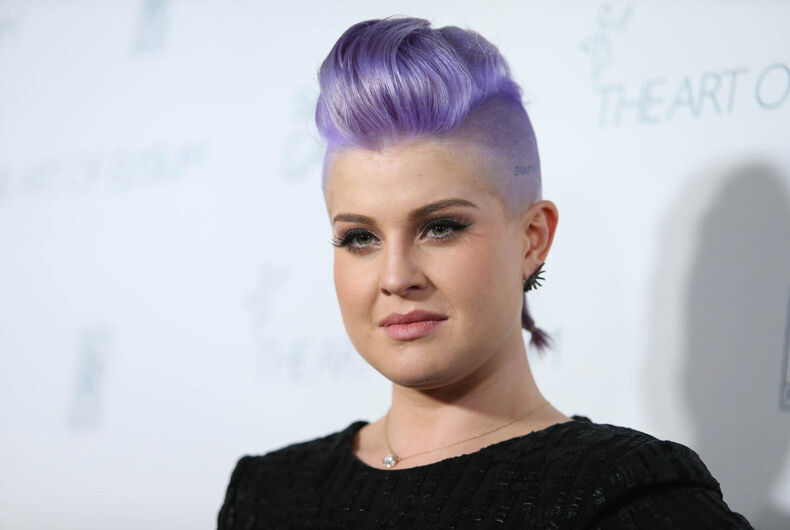 Kelly Osbourne arrives at The Art of Elysium Heaven Gala at Hangar 8 in Santa Monica, Calif. Osbourne apologized Tuesday, Aug. 4, 2015, for comments she made earlier in the day on "The View" about Latinos cleaning Donald Trump's toilets. Photo: Omar Vega/Invision/AP

While accepting an award from The Trevor Project, Kelly Osbourne told the audience to give president-elect Donald Trump a chance.

Apparently she hasn’t been paying attention to his cabinet choices thus far. Or that he pledged to sign the First Amendment Defense Act, which would open the doors for nationwide anti-LGBTQ discrimination.

“We’re living in a time when we might not have the future president that we wanted in this country,” Osbourne said at Sunday’s fundraiser event, according the The Hollywood Reporter. “And as an immigrant who can’t vote, I don’t really get to say much. But tonight, I do. People voted for him. So just like they gave us a chance to love equally, we will fight to keep that.”

“But we have to give him a chance,” she continued. “And we do it by spreading love, not hate.”

Osbourne, who has been active The Trevor Project LGBTQ youth crisis prevention group for years, and she thanked them for the work they do, saying, “You save so many lives.”

She was given the Trevor Hero Honoree Award. Facebook was given their 20/20 Visionary Award and YouTube star Ingrid Nilsen was given the Digital Innovator Award. Presenters and performers included Margaret Cho, Martha Plimpton, Cheyenne Jackson and Our Lady J.