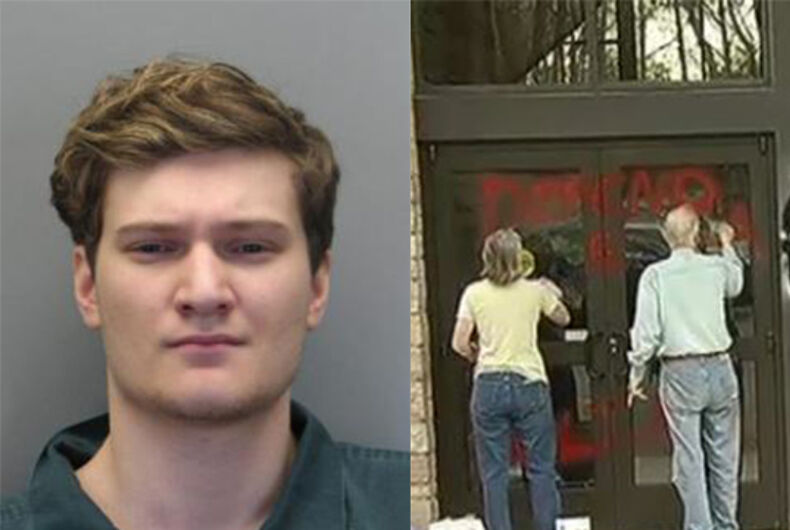 A suspect has been arrested in connection with two incidents of anti-LGBTQ, anti-Semitic, and Islamophobic graffiti at two houses of worship in Annandale, Virginia.

Fairfax County police reported in a statement on Thursday that Dylan M. Mahone, 20, of Annandale, was arrested “in connection with three hate-motivated incidents,” including the vandalism of the Jewish Community Center of Northern Virginia (JCC) and the Little River United Church of Christ, during the early hours of Tuesday morning. The other incident involved the posting of anti-Semitic flyers.

“The Northern Virginia Community College Police initiated an investigation on March 20 for anti-Semitic flyers that were posted on campus,” the statement reads.

The Little River United Church of Christ, and signs out front, were targeted with anti-LGBTQ, anti-Semitic, and anti-Muslim messages.

Little River United Church of Christ prides itself on its progressive stance, affirming LGBTQ people and speaking out against Islamophobia.

A post on the church’s Facebook page also reported the graffiti included, “Hitler was right” as well as numerous swastikas.

Lindsey told WAMU that he was shocked, but not necessarily surprised by the vandalism.

“There’s so much hateful rhetoric in the public sphere right now and there seems to be a certain freedom to indulge in these kinds of crimes,” he said.

Lindsey told the local NBC affiliate that the church has been targeted for its openness in the past.

“We’re going to celebrate LGBT folks as they are, as God’s children, being that if they feel called to ordained ministry we’re going to pursue that,” Lindsey said, adding that the church marries same-sex couples.

The Jewish Community Center of Northern Virginia, which is located less than two miles away, was also vandalized on Monday night or early Tuesday morning. Monday was the first night of Passover.

Executive Director Jeff Dannick said in a statement that the vandalism furthers the JCC’s mission to “bring communities together.”

Dannick describes the JCC as “an open church,” where they are “always glad to have folks come to worship.”

“We are disheartened and deeply disturbed by the anti-Semitism our campus has experienced today,” Dannick said. “We will not be deterred from our mission of being an open and welcoming place for people of all backgrounds as we continue our operations as normal.”

Little River United Church of Christ will host a community vigil on Saturday, April 15, at 7:30 p.m. in response to the vandalism, according to its website.

“This vigil is open to people of all faiths and to people of no particular faith. Members of several faith traditions will help lead the service, including friends from the JCC. Pastor David hopes that this vigil will help our communities — Little River UCC, the JCC, and our various neighbors — begin to heal,” it reads.