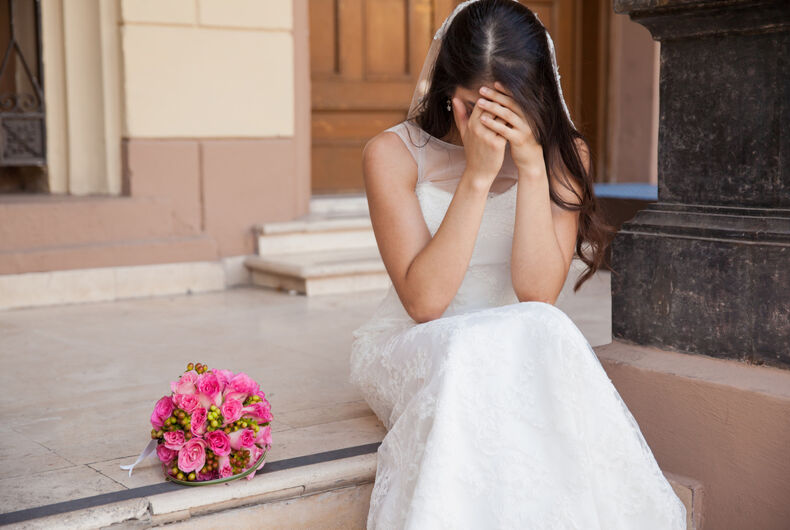 A new bill passed by the Texas senate would allow private contractors to issue marriage licenses if county clerks object to a marriage.

The bill is intended to create a religious exemption for county clerks who hold “a sincerely held religious belief” that they feel bars them from issuing a marriage license to a couple.

If a clerk has such a belief, they will be allowed to ask a deputy clerk to issue a marriage license, or a judge or magistrate. If none is available, they can ask a “certifying official.”

A certifying official can be anyone according to the law, and this official would only be allowed to issue marriage licenses. There are no minimum qualifications in the law to become a certifying official, leaving the door open to private contractors.

The bill would also allow these certifying officials to do their job on the phone or online. So a same-sex couple applying for a marriage license might have a long wait while a county office figures out what it’s doing.

While there are a number of reasons a marriage might run afoul of the rules set by a clerk’s religion, same-sex couples have been the primary targets of these religious exemptions in recent years. For example, while the Book of Romans prohibits divorced women from remarrying if their husband is still alive, county clerks haven’t been denying divorced women marriage licenses if they can’t produce a death certificate.

Mark Joseph Stern at Slate noted that the language here is fairly broad about the reasons a couple can be sent to get a marriage license online, and he cited examples like interracial and interfaith couples. That his mind went instantly to other maligned minorities and not to other specific rules about marriage shows that we all know what these laws are about.

Moreover, if Texas Republicans actually cared about religious freedom, it’s strange that this law is limited to marriage licenses. For example, a county or state worker could have a “sincerely held religious belief” that women shouldn’t drive, and yet Texas Republicans aren’t working on a law that would allow the Texas DMV to hire contractors to issue driver’s licenses to women.

The narrowness of the law works like a target, and it shows that a maligned minority is being singled out for worse treatment, not a broad principle being applied fairly.

Bills like this one show that it’s still taboo for government officials to deny services to people because of their personal beliefs. That’s a good thing, and it makes it clear that what we’re working against here is animus towards LGBTQ people.

If Republicans want to live in a world where government workers can use their personal beliefs to deny people government services, they really have to go all the way or not at all.

How much money is Ivanka Trump making off her dad’s presidency?