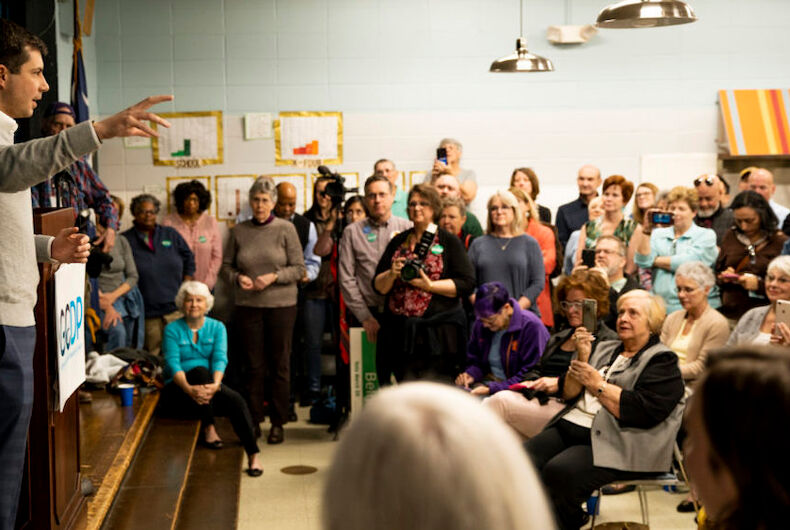 So Pete Buttigieg has finally made it official: He’s running for president. You’d be forgiven for thinking he already was, but in the intricate Kabuki dance of national politics, Buttigieg was merely in an “exploratory phase.”

There’s no question that Buttigieg is having what political reporters have dubbed “a moment.” A recent profile was titled “Wonder Boy.” His followers are raving about the Buttimentum.

All of which is great. But in a long campaign for the nation’s highest office, it only takes you so far. (Remember Howard Dean?) As even Buttigieg acknowledges, “I haven’t won anything other than a few media cycles.”

Now that it’s starting to get serious, Buttigieg’s campaign faces some real obstacles. Sure, Buttigieg will do really well in campaign debates, but that’s just one part of the campaign. These hurdles can be overcome, and Buttigieg has shown an almost preternatural ability to turn what looks like a shortcoming into an asset.

Here are five hurdles that Buttigieg is going to have to clear if he’s ever to have a shot at becoming the Democratic presidential nominee.

1. Make a strong showing in early races. Past presidential races are littered with the bodies of candidates who faltered in the earliest races: Iowa and New Hampshire. Whether these early states should carry so much weight is a separate argument, but the fact remains that the results there start to winnow the field. Buttigieg needs to do well in those early races — perhaps not an outright win, but strong enough to show that voters look at a 37-year-old gay mayor and see a potential president.

2. Build a campaign infrastructure. Winning means having experienced political operatives working for you, a field staff in key states to turn out the vote and a well-developed campaign plan that everyone executes on. Buttigieg started out with none of these things. As a former McKinsey consultant, Buttigieg no doubt knows the importance of having a detailed plan. He will have to start hiring experienced people soon can execute on that plan.

3. Keep up the fundraising. Buttigieg’s momentum has resulted in some real money: $7 million in the first quarter. While that amount isn’t in the same league as Bernie Sanders or even Beto O’Rourke, it’s impressive for someone who started his campaign as a long shot. However, Buttigieg is going to have to keep raising money at this clip or do even better if he’s to have staying power as a candidate.

4. Start getting specific. One of the raps on Buttigieg is that he talks a great game, but he’s really short on the policy specifics. While Elizabeth Warren has been releasing detailed policy papers outlining not just what she would do as president but how she would accomplish it, by contrast, Buttigieg has come out for general concepts but he has been pretty vague about the details.

He supports Medicare for all who want it, but he hasn’t detailed exactly how that would work. That will have to change as the campaign goes along, particularly as the spotlight shifts to the differences among the candidates.

5. Withstand the negative coverage. So far, Buttigieg has been riding on a sea of positive coverage. He’s also had the advantage of defining who he is without others doing it for him. That’s not going to last forever.

The media is only now starting to take a deep dive into his past. He has gotten some criticism from the black community in South Bend over the way he’s handled urban renewal, and his recent gaffe about “all lives matter” didn’t help. We still haven’t heard much about what he’s done at McKinsey or about his military service in Afghanistan. Then there’s his father, who was a Marxist, which will be the object of endless fear-mongering by the right.

No doubt the Wonder Boy image will take some hits. The test of Buttigieg’s candidacy will be how well he’ll be able to handle them.

It takes 4 hands to open this ‘consent condom,’ but does that really equal consent?