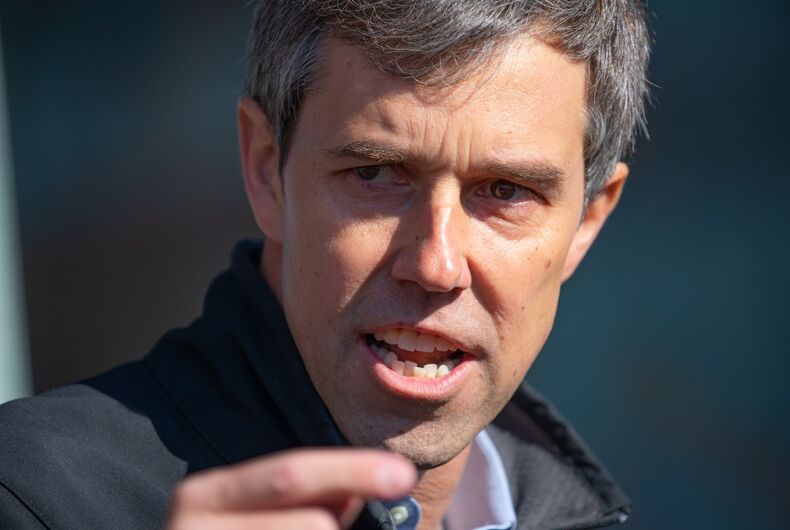 2020 presidential hopeful and former Rep. Beto O’Rourke (D-TX) is defending his proposal to remove the tax-exempt status of anti-LGBTQ religious institutions, standing up for civil rights law in a way that one hopes the Democratic Party as a whole supports.

The right promptly freaked out, with Donald Trump calling him a “wacko” and rightwing columnist Ben Shapiro threatening to shoot O’Rourke. Even his fellow Democrats like South Bend Mayor Pete Buttigieg and Sen. Elizabeth Warren (D-MA) said they disagreed with him.

At the LGBTQ Town Hall last week, CNN host Don Lemon asked O’Rourke if “religious institutions like colleges, churches, charities” should lose their tax-exempt status if they are against marriage equality.

“There can be no reward, no benefit, no tax break for anyone, or any institution, any organization in America, that denies the full human rights and the full civil rights of every single one of us,” he explained. “So as president, we are going to make that a priority, and we are going to stop those who are infringing upon the human rights of our fellow Americans.

On MSNBC’s Kasie DC show, O’Rourke didn’t repudiate his statement. Instead, he clarified, “You are free to believe anything that you want in his country to associate with whom you please to practice your faith, as you best see fit.”

“But you are not allowed to discriminate against people in this country, to violate their civil rights, or their human rights. And so, what I’m talking is making sure we follow the letter and the spirit of the law.”

He reaffirmed his support for the Equality Act, which would add the categories of sexual orientation and gender identity to the Civil Rights Act, banning discrimination against LGBTQ people at the federal level.

“This is not a new concept in American life,” O’Rourke continued. “We know that Bob Jones University – a religious, nonprofit tax-exempt institution – had its tax-exempt status revoked for denying entry and equal treatment to African American students.”

“If any institution, if any nonprofit organization is going to deny services or equal treatment under the law to gay Americans or members of the LGBTQ community then they’re going to be breaking the law and we’ll hold them accountable. And if they persist, we will withdraw their tax-exempt status.”

His reference to Bob Jones University elucidates his position. In the 1970 Green v. Kennedy decision, a federal court told the IRS that it could not grant tax-exempt status private schools that discriminate on the basis of race, citing Title VI of the Civil Rights Act that prohibits discrimination “under any program or activity receiving federal financial assistance.”

So the IRS changed its policy. Bob Jones University, a fundamentalist Christian school, discriminated against Black students in the 1970’s and also banned interracial relationships, insisting that its sincerely held religious beliefs required it to be racist.

In the 1983 Bob Jones University v. United States decision, the Supreme Court decided that the IRS could revoke BJU’s tax-exempt status for its exclusion of Black students and its ban on interracial relationships, despite BJU’s insistence that its religion required it to discriminate. The Court cited the Civil Rights Act of 1964 in support of the IRS.

The Supreme Court said that its decision does not apply to “churches or other purely religious institutions.” The issue wasn’t anyone’s religious beliefs, but the fact that they were discriminating in education.

While this isn’t as radical as removing tax-exempt status from churches that refuse to accept LGBTQ people as human beings, the Republican Party is still very much opposed to it.

Donald Trump has already said that he will veto the Equality Act because it doesn’t provide a religious exemption. The GOP believes that any person or business (even bakers) should be allowed to claim that their religion requires them to discriminate against LGBTQ people, a position they don’t take when it comes to other laws or even other targets of discrimination.

Warren and Buttigieg responded only to O’Rourke’s answer about churches themselves, and that’s an easy one to brush aside. Senator Cory Booker (D-NJ) was asked a similar question at the LGBTQ Town Hall, and he gave a non-answer.

But O’Rourke is dealing head-on with a question that will definitely come up if the Equality Act ever passes. There are schools that receive federal funding in the form of tax breaks, grants, and student loan money that refuse to allow LGBTQ students. Those schools will fight the law.

The Equality Act will either have to give those schools a religious exemption or Democrats will have to defend applying the law fairly. While liberals criticize him for his “fumble,” he was ultimately willing to take the right position and oppose religion-based discrimination.

Chick-fil-A offered a school a free lunch. The principal rejected it to support LGBTQ teachers.