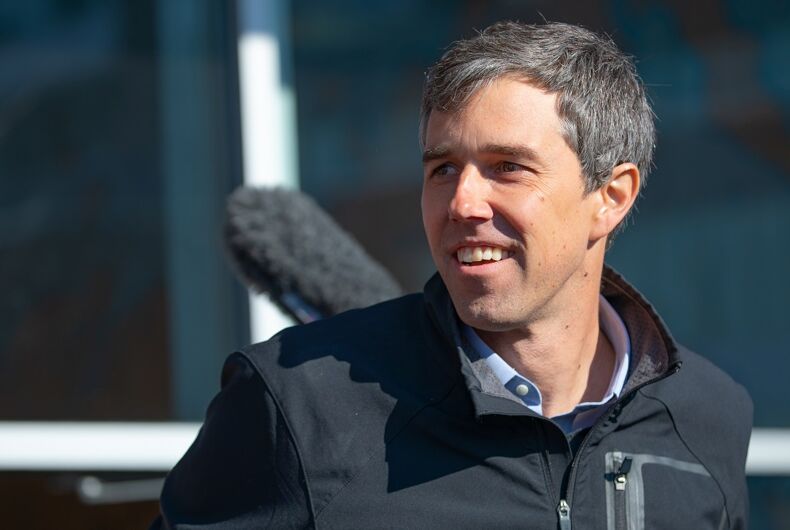 Republicans are flipping out over one Democratic candidate’s proposal to end the tax-exempt status of anti-LGBTQ churches and nonprofits.

O’Rourke immediately said “Yes” and got cheered by the audience at the debate.

There can be no reward, no benefit, no tax break for anyone, or any institution, any organization in America, that denies the full human rights and the full civil rights of every single one of us. So as president, we are going to make that a priority, and we are going to stop those who are infringing upon the human rights of our fellow Americans.

2020 hopeful @BetoORourke said tax exempt status, under him, would be stripped from religious institutions that did not support same-sex marriage or discriminated against anyone in any way.#EqualityTownHall pic.twitter.com/BpQQVR5FeX

Conservatives do not agree with this obviously. O’Rourke’s campaign accused the right of willfully misinterpreting his words.

Donald Trump called O’Rourke a “wacko” for his statement at the debate.

“As you know, just a few days ago, a Democrat running for president proposed revoking the tax-exempt status of many churches and religious groups,” Trump said while addressing the Family Research Council’s Value Voters Summit over the weekend. The FRC has been designated an anti-LGBTQ hate group by the Southern Poverty Law Center.

Pastor Franklin Graham, CEO of the Billy Graham Evangelistic Association and son of Billy Graham, responded to O’Rourke in a Facebook post.

“This gives you a clue of what the progressive, socialist-leaning Democratic Party is going to try to force on our nation if they win any election,” Graham wrote. “They will create laws and ‘consequences’ that would punish those who do not agree with them. These socialists in the Democratic Party are a threat to religious freedom and free speech. This would be a step toward silencing the voice of the church and the influence of Christian universities and organizations.”

“As for me, I will not bow down at the altar of the LGBTQ agenda nor worship their rainbow pride flag. I’m going to stand with the Word of God, the Holy Bible, which is truth from cover to cover.”

Ben Shapiro, who runs The Daily Wire, threatened to shoot O’Rourke over his comments.

“Beto O’Rourke does not get to raise my child,” Shapiro said. “And if he tries, I will meet him at the door with a gun.”

Ben Shapiro warns that if politicians try to mandate LGBTQ 'indoctrination' at all schools, then he will "pick up a gun." Further adding "Beto O'Rourke does not get to raise my child. And if he tries, I will meet him at the door with a gun" pic.twitter.com/Hq7SyF7FeI

Gay conservative columnist Brad Polumbo wrote about the comments under a headline that said that O’Rourke “wants to bankrupt churches who don’t believe in gay marriage.”

He did not explain why losing tax-exempt status would bankrupt churches.

“This extreme intolerance is un-American,” he said.

Even fellow Democratic candidate and South Bend Mayor Pete Buttigieg wasn’t on board with O’Rourke’s comments.

Speaking with Jake Tapper on CNN’s State of the Union, Buttigieg said that O’Rourke’s comment amount to “going to war not only with churches” but also “mosques and a lot of organizations.”

“I agree that anti-discrimination law ought to be applied to all institutions, but the idea that you’re going to strip churches of their tax-exempt status if they haven’t found their toward blessing same-sex marriage — I’m not sure he understood the implications of what he was saying,” Buttigieg said.

“Of course, Beto was referring to religious institutions who take discriminatory action,” said Aleigha Cavalier, a spokesperson for the O’Rourke campaign.

“The extreme right is distorting this for their own agenda.”

It appears as though he was trying to say that he is against allowing government contractors, even religious ones, and universities that receive federal funding to discriminate against LGBTQ people. The Supreme Court has already ruled that it’s constitutional to withhold tax exempt status from universities that discriminate on the basis of race, even if those universities claim it’s part of their sincere religious beliefs.

But either O’Rourke was not listening to Lemon’s question – which specifically mentioned churches and asked about taking away their tax-exempt status on the basis of their beliefs, not their actions – or he’s not familiar enough with the relevant political issues to know where these distinctions are being made that he fumbled his response.