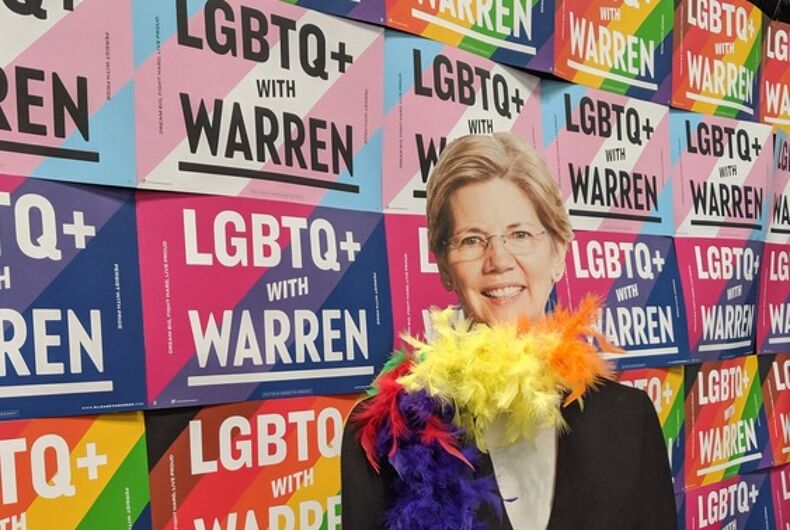 DragCon is one of the biggest events in drag in the year, especially for fans of RuPaul’s Drag Race. Drag-related businesses set up booths for attendees.

This year, one of the booths that stood out was for Senator Warren (D-MA), complete with a life-size cutout of Warren with a rainbow boa draped on it. She was the only presidential candidate to have a presence at the convention.

Now THIS is why it's important for presidential campaigns to hire an LGBTQ Outreach Director!!@SenWarren's team told me they had one on staff…and it SHOWS at @RuPaulsDragCon #DragCon pic.twitter.com/Pf5k20r87d

She also had a message for people at DragCon that was played at the convention.

“I’m in this fight for full LGBTQ+ equality,” Warren said. “We’ve got a lot of work to do to make sure that everyone is free to be who they are and to love who they love.”

She specifically mentioned violence against transgender women of color.

Did you miss @ewarren's message to @RuPaulsDragCon? Don't worry, we saved it for you! #DragCon pic.twitter.com/7zFZpMl9Y8

Drag queen Marti Gould – who got internet famous for her lipsync to “Baby Shark” – called Warren’s participation in DragCon “fierce.”

Slay @ewarren is only candidate to have a presence at @RuPaulsDragCon – that’s fierce https://t.co/b7VH6pqovs

Shea Couleé, who was on season 9 of RuPaul’s Drag Race, spoke at Warren’s booth because she wanted “to bring some awareness to her campaign.”

“We have so many conversations with so many young people and voters, and I think it’s important that we get these young voters fired up and excited about the next presidential election,” she told NBC News.

Hasbro’s new Monopoly puts gender inequality on the board