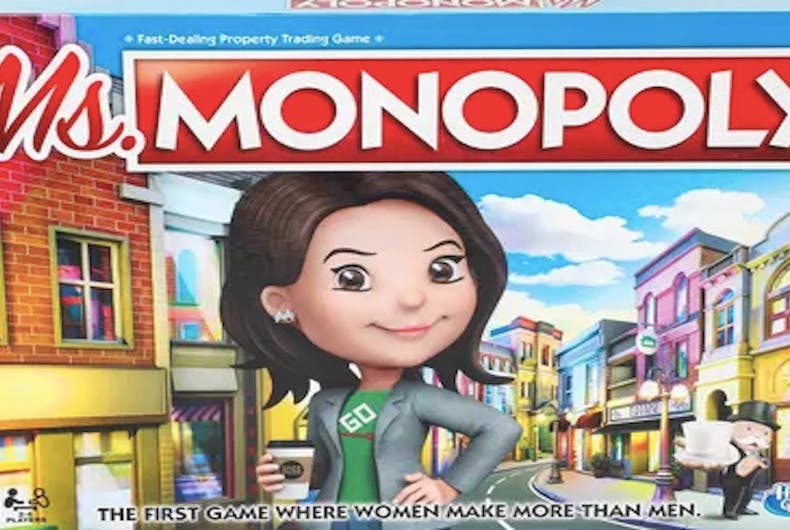 On average, U.S. women earn 20 percent less than men. So Hasbro has decided to incorporate the reality of the “gender pay gap” into their new game Ms. Monopoly.

The game is almost entirely the same as classic Monopoly: Players accumulate properties, utilities and wealth as they bankrupt their competitors. But Ms. Monopoly turns the gender wage gap on its ear by making sure that female-identified players consistently earn more than men.

“Instead of investing in real estate properties like the classic game, players invest in inventions and innovations made by women, including chocolate chip cookies, bulletproof vests, solar heating and ladies’ modern shapewear.”

“We made sure that this felt authentic and was a fun game families could play and learn about these things that they love and are a part of their life that they didn’t know were invented by women,” says Jen Boswinkel, senior director of global brand strategy and marketing for Hasbro Gaming.

Here’s a video showing the new Ms. Monopoly board game:

Another thing people didn’t realize was invented by a woman: Monopoly itself.

Lizzie Magie invented the first version of the game in 1907, entitled The Landlord’s Game, to demonstrate the negative consequences of concentrating land ownership into private monopolies, though the modern-day game arguably diminishes that lesson.

A man named Charles Darrow created a modified version of Magie’s game with different property names and sold the idea to the Parker Brothers game company. The company later bought the patent for The Landlord’s Game from her for $500 and began mass producing the game as Monopoly by the late 1930s.

Magie was later enraged by the fact that Monopoly ripped off her original game and Hasbro has excluded her from its official history of the game’s creation ever since.

Monopoly is quite possibly the world’s most popular board game. It has been translated into over 103 languages and played by over one billion people in 114 countries.

Homophobic comedian Kevin Hart recently landed a role in an upcoming movie based on Monopoly.