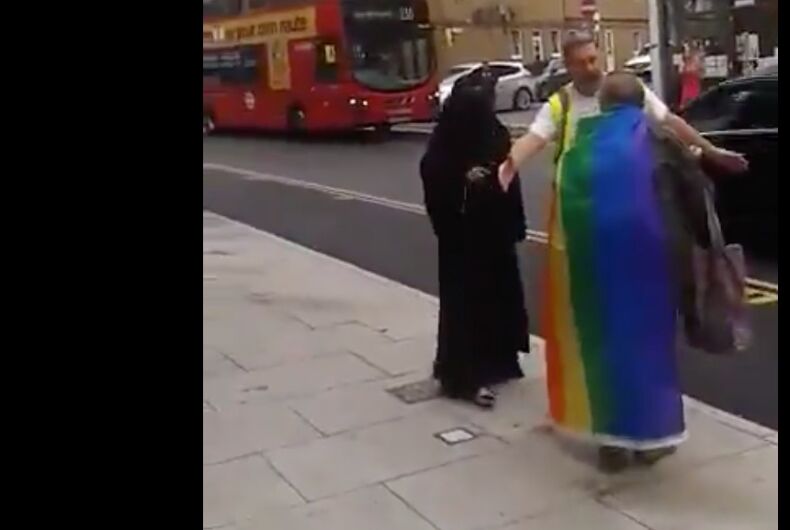 A homophobic argument in the street during Waltham Forest Pride has led to hate crime charges against a 38-year-old Muslim woman.

The pride event, held on July 27, saw hundreds or revelers march through the Waltham Forest borough located in Northeast London. One of those celebrants was scorned by the woman as seen in a video shared by Paul Embery on Twitter.

Apparently this is from Waltham Forest Pride today. Slightly surreal to hear the Muslim woman quote a line from Alan Partridge when berating this poor man. pic.twitter.com/EYp2O6vivQ

The woman, now identified as Jamila Choudhury, pointed her finger in the face of the reveler wearing a pride flag over his shoulders as another, presumably a safety monitor, stands between the two. Choudhury was adorned in a full, black niqab.

Related: A man was shouted at for wearing a pink kippah: ‘You’re desecrating the name of God!’

“Shame on you,” Choudhury repeatedly shouted, before breaking out the old line, “God created Adam and Eve, not Adam and Steve.”

Waltham Forest police had reacted to the video via Twitter, saying, “We are aware of footage circulating on social media of abuse directed at those taking part in the Waltham Forest #Pride event  #wearewalthamforestpride and enquiries are underway.”

“Abusing someone because of their sexual orientation or gender identity is a hate crime,” police added.

Now, Choudhury is in custody for the crime.

A statement from the Waltham Forest Pride organizing committee condemning the incident also sought to dampen the use of this incident to stoke anti-Muslim attitudes, saying, “we also condemn outright and unequivocally all forms of hatred and abuse, including Islamophobia and anti-Semitism, and want to make it absolutely clear that this was one, lone individual and in no way do that person’s views represent the views of any section of the local community.”

“Any attempts to use this incident to fan the flames of discord between communities in our great borough. Hear this – it hasn’t worked in the past, it won’t work now, and it never will,” they added.

Choudhury has been released on bail and will be in court on October 3.

Jerry Falwell Jr was caught at a Miami nightclub & lied about it. Now the photos are coming out.