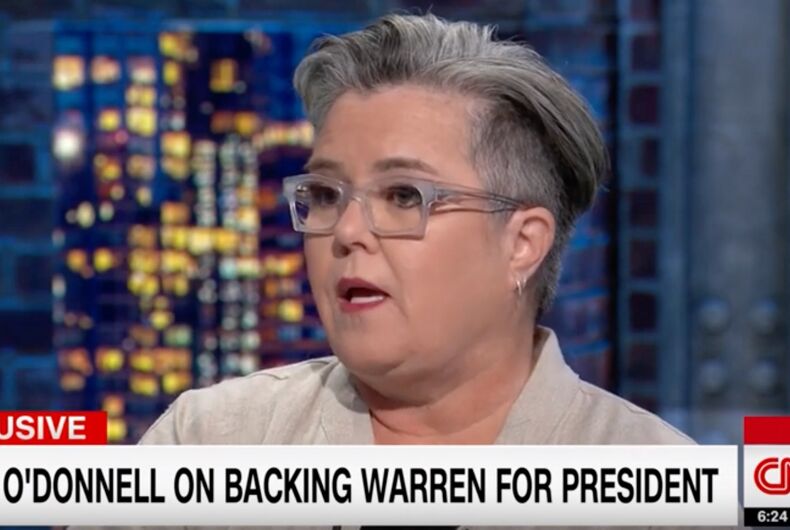 Rosie O'Donnell's first pick to be the 2020 Democratic nominee is Elizabeth WarrenPhoto: Screenshot

Rosie O’Donnell is calling on former Vice President Joe Biden to drop his bid for the White House.

“I think Joe Biden should say, ’I’m going to sit this one out; I’m going to be an elder statesman and I’m going to advise’,” O’Donnell told Chris Cuomo during an appearance on CNN. “And then whoever is the nominee, I think, should think about how to best use somebody with the experience that Joe Biden has, and all these years of politics. But he’s not the future of the Democratic Party.”

She says she would be “thrilled” if either California Senator Kamala Harris or Massachusetts Senator Elizabeth Warren won the nomination.

When Cuomo pushed back, pointing out that if the metric is beating Trump, Biden leads in the polling of current candidates and beats Trump in a head-to-head match up. If Biden is the person everyone wants, why isn’t he the future of the party?

Biden is “antiquated in a lot of his thinking, a lot of his beliefs,” O’Donnell countered. “A lot of his history is from a long time ago. And I feel like it is time to pass the torch. I don’t think 80 is an age to be starting a presidency.”

“He’s the only one that beats the current president,” Cuomo shot back.

“Well, that’s what they say,” O’Donnell answered. “But I don’t believe that’s true. Your time has passed in terms of being the President of the United States. That’s my personal opinion.”