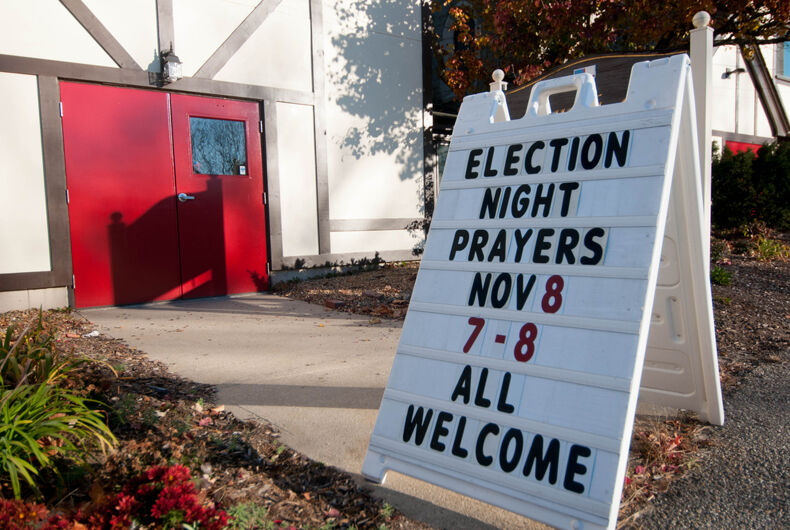 A sign for election night prayers at the Church of Our Savior in Milford, New Hampshire.Photo: Shuttersto

Evangelical Christian leaders are promising to pour millions of dollars into President Donald Trump’s reelection campaign. While the politician has continually acted decidedly not Christ-like while in office, his willingness to enact their social agenda in exchange for campaign dollars and votes has won him their continued backing.

The Faith and Freedom Coalition has announced they will go all-in for the President, according to The Hill. They claim they will register a million conservative Christian voters and mobilize an army 30 million people nationwide.

“Trump’s support among Christian voters is at an absolute fever pitch right now,” Lance Lemmonds, the group’s  communications director said. The group is led by anti-abortion extremist Ralph Reed, who has turned his gaze on LGBTQ rights as a more lucrative cash cow.

Reed has recently started trailing out presidential candidate Pete Buttigieg on the campaign trail to heckle and demean him for being gay. In April he staged a protest outside one of Mayor Pete’s rallies that featured a Buttigieg impersonator flogging Jesus as Satan cheered him on. He also shouted insults and anti-gay slurs at the candidate.

The anti-LGBTQ hate group Family Research Council is also gearing up to help reelect Trump and solidify their political power. The site reports that the group’s “political action arm is activating its network of churches and community impact teams in North Carolina, Michigan, Florida, Ohio, Pennsylvania and Texas to turn out the vote.”

Other groups, like the anti-abortion group Susan B. Anthony List, have also pledged their support to the President.

Trump’s behavior both in and out of office have largely garnered no traction inside religious right circles. Despite quite literally doing the exact opposite of everything the Bible says Jesus Christ taught, evangelical leaders have exchanged political power in favor of morality.

“I’m reluctant to comment on another person’s faith, but I would say it is hard to look at this president’s actions and believe that they’re the actions of somebody who believes in God,” Buttigieg said earlier this year. “I just don’t understand how you can be as worshipful of your own self as he is and be prepared to humble yourself before God.”

With the American Taliban’s political power expanding dramatically under the Trump administration, they’ve started worshipping themselves too.

These guys found the best way to scare off a Christian Pride protestor. They kissed.