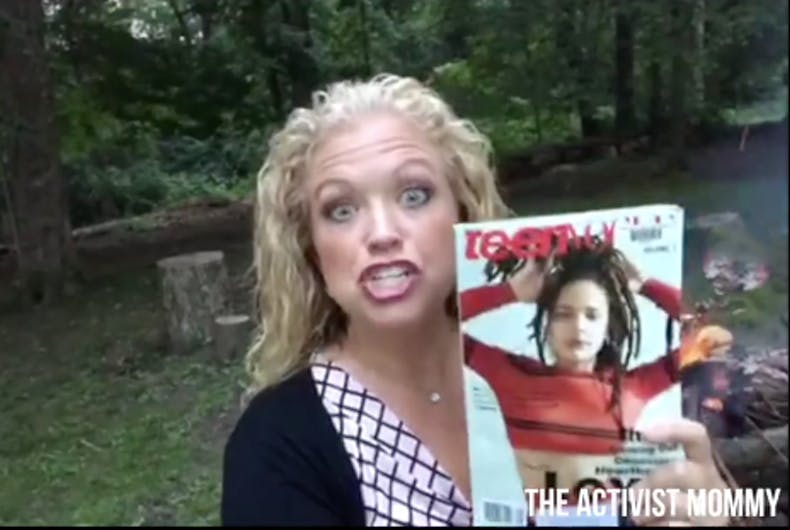 A library in Jacksonville, Florida, canceled an LGBTQ youth event after it came under attack from online activists, including Elizabeth “Activist Mommy” Johnston.

A hundred students had signed up for the Storybook Pride Prom at the Willowbranch Library in Jacksonville, which was supposed to happen this coming Friday.

“Come dressed inspired by your favorite book character– casual, formal, or in drag – whatever makes you feel great. Be you!” the event description said.

But the event drew the ire of conservative activists like Johnston. She shared the library’s phone number on her Facebook page and told her followers to “express your disgust that this perversion is taking place in a taxpayer funded library!”

“For all the sensitive stomachs out there, I apologize for the graphic pictures,” she wrote. “I selected milder ones for you. If these perverts are going to come after children, I have to expose it! I know it ain’t pretty!”

Posted by The Activist Mommy – Elizabeth Johnston on Friday, June 21, 2019

But she wasn’t the only one getting people to make threatening calls to the library. Raymond Johnson, the founder of Biblical Concepts Ministries, sent an email alert to his followers calling on them to contact city officials to get the LGBTQ teen event canceled.

All of this attention was too much for the local library. Chris Boivin, assistant director of community relations and marketing at the library, said that the prom was canceled because they couldn’t guarantee “safety and security for everybody involved.”

Boivin said that the library received hundreds of phone calls and messages on Facebook about the event.

But some people believe that the library didn’t really try to guarantee the event’s security.

Beatrice Palmer, a drag performer who was set to appear at the library, said that the sheriff’s office was working on arranging security for the event.

“You know how to keep 100 people in your library safe,” Palmer said. “It is possible to keep 100 kids safe in a library. But when it’s gay children, it becomes a problem.”

Boiven said that there are currently no plans to reschedule the event.

Homophobes, though, are satisfied by the outcome.

“The drag queen world should not be presented to our children or teenagers in a public space like a library,” Jacksonville resident Mark Nelson told the Times-Union. He called the library after he saw Activist Mommy’s call to action.