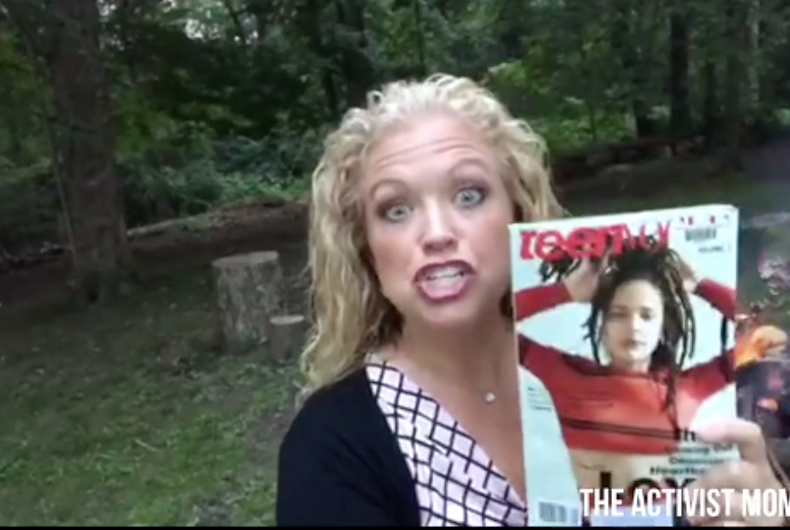 A Christian homeschooling mother of 10 who goes by “The Activist Mommy” is waging war on Teen Vogue for having the gull to teach safe sex to their readers.

Johnston created a video ranting about the contents of a magazine no one forced her to buy, before calling on her fans to “go to your local gas stations, your local libraries, and your local grocery stores” and “demand that they remove Teen Vogue from the shelves immediately.”

“These editors brains are in the gutter, now let’s put their sales in the gutter where they belong,” she said, before ripping up the magazine and throwing it in a fire, because DRAMA! She added that “the authors minds are in the garbage.”

You can watch the video below, and you can also run out and pick up a copy of Teen Vogue, on newsstands now. Whether you’re buying it for its educational content, or to ceremoniously destroy it, the gutter-and-garbage-minded staff will undoubtedly appreciate your money either way.

Johnston refers to her womb as her weapon, and believes in roping her children into her anti-abortion activism.

“I will never forget the time we were participating in an outreach outside of a North Carolina abortion facility,” she writes. “There were maybe 10 pro-abortion and homosexual adults out there waiting for us when we arrived. When we all began to unload out of our 12 and 15 passenger vans, we outnumbered them 10 to 1! Why? Because of our children! It was the perfect illustration of how cutting off your offspring is a losing proposition.”

She has previously called for a boycott of Vicks VapoRub over their commercial in support of transgender rights, referring to the woman in the ad as “a square-jawed, plain-as-day man.”

UPDATE: The article in question is not even in the issue Johnston is burning, as it turns out, making the whole fake outrage she shows that much more bogus. Phillip Picardi, Digital Editorial Director of Teen Vogue, set the record straight on Twitter.

It's not in the magazine. We publish wonderful exclusive content for digital.

Wait — it’s not even in the print copy? So she’s burning a magazine that doesn’t even contain the article she finds objectionable?

Picardi then explained why the magazine would publish the content in a thread thoughtful thread.

It's funny, because I went to Catholic high school and had 0 sex education. I also had a teacher tell me gay sex was a sin in God's eyes.

The kind folks at Callen-Lorde taught me about HIV/AIDS, what it is, and how it's contracted. They also told me to get tested regularly.

Then they taught me the importance of safer sex, and what I needed to know in particular as a gay man.

You see, my Catholic school was guilty of endangering all of us by sheer omission of FACTS. EDUCATION doesn't equal ENCOURAGEMENT.

TBH, it is IRRESPONSIBLE. How can you possibly expect teenagers to practice safe sex if they don't know what's at risk?

The backlash to this article is rooted in homophobia. It's also laced in arcane delusion about what it means to be a young person today.

Instead, I made mistakes that consisted of quite a few doctor's appointments! But I'm ok!!

to a growing population. Gen Z will be our queerest and most fearless generation yet.

In conclusion, here’s my only reply I’ll be giving to any of the messages. ? pic.twitter.com/KiFjVqLlH3

Bronx cheer: Why won’t the Yankees support their LGBT fans?