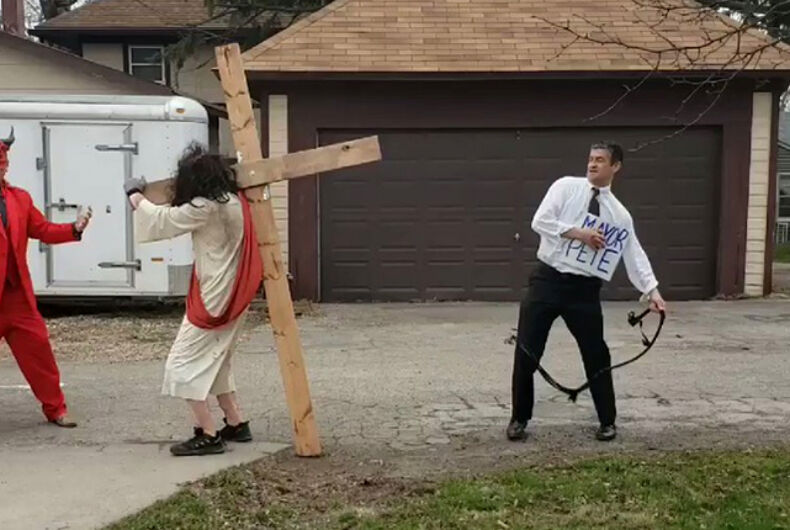 The religious right has come unglued at out presidential candidate Pete Buttigieg’s rise in the polls and while the regular sources have continually spouted ugly denouncements of the candidate because he’s gay, the past two days have been particularly fraught with decidedly anti-Christian protesters.

But the most bizarre protest happened this morning as Buttigieg campaigned in Marshalltown, Iowa.

One man dressed as Pete Buttigieg whipped another man dressed as Jesus and tied to a wooden cross. A third man, dressed as Satan and drinking a cup of coffee, spoke to the crowd while also urging “Pete” to hurt the Christian savior more.

“Beat the savior, beat him — I hate this guy,” Satan cried. “Yes, more blood, Peter. Every vote is a lash on the back of Christ.”

He also told the crowd that Buttigieg was “polling number one in hell.”

Oh my god. The protester has a fake @PeteButtigieg whipping Jesus on a cross. I have no words. pic.twitter.com/VxeqXbfAIs

Guys dressed up as Devil and Jesus outside Pete’s morning event at someone’s home. Devil saying “there’s nothing like a warm cup of blood in the morning.” Devil says Buttigieg is “polling number one in hell” pic.twitter.com/mytyEQ3cmZ

The candidate faced anti-gay chants at two campaign stops in Iowa earlier this week that were organized by a far-right group.

At a campaign stop in Des Moines, a person outside called Buttigieg “baby killer” and shouted repeatedly “Remember Sodom and Gomorrah” after Buttigieg brought up his husband, Chasten.

Buttigieg acknowledged the heckler, telling supporters, “The good news is the condition of my soul is in the hands of God. But the Iowa caucuses are up to you” as the crowd erupted in laughter.

A different heckler at another stop also got laughed off by the candidate and the crowd.

This town’s Confederate flag was taken down. So they ‘vandalized’ the flagpole with a rainbow flag.