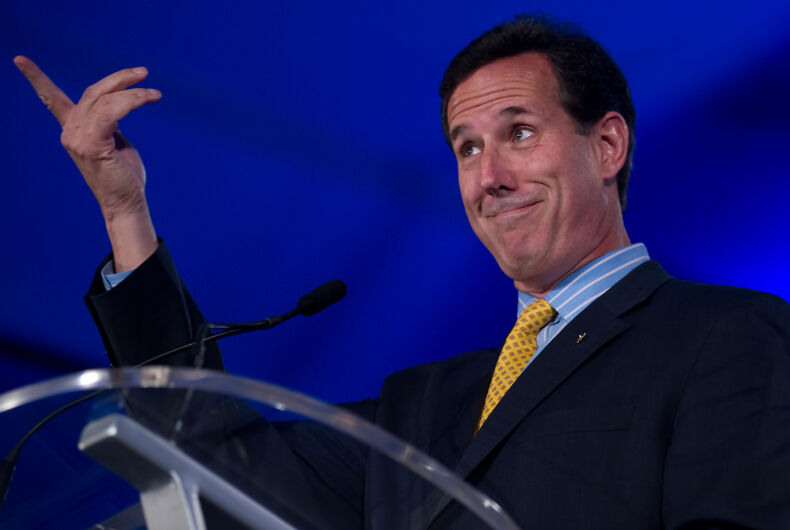 Out presidential candidate Pete Buttigieg has found an unlikely defender after evangelical leader Franklin Graham called on the candidate to “repent” of his homosexuality.

Rick Santorum, one of the most conservative religious politicians and a former Republican presidential candidate, found himself actually pointing out the hypocrisy of the religious right during an interview with CNN’s New Day.

After host John Berman asked Santorum about the dustup, Santorum first defended Graham’s right to say what he did.

“He is a religious leader. He is not a politician,” Santorum said. “He is talking biblically. He has the right to put forth what his faith is instructing him to day.”

After Berman pointed out the hypocrisy of Graham “calling on Pete Buttigieg to repent for being gay, yet [being] one of the most ardent supporters of the thrice-married President Trump,” Santorum shocked the host by agreeing. Graham has been on the biggest supporters of the decidedly un-Christian president.

“I would say that you have every right to call him out on that. Because if he’s gonna say that about Pete Buttigieg, then he needs to when Donald Trump’s accusations come up about marital infidelity and other things that is equally as sinful,” Santorum said. “He should be equal and vociferous in calling out a similar sin.”

“Infidelity, you are saying, is a similar sin as being gay?” Berman asked.

“Well that’s what the Christian religion teaches,” Santorum replied. “Both are violations of the traditional and sacred bonds of marriage, that outside of marriage is sinful behavior, yes.”

When Berman pointed out that your religion is a choice, but it’s commonly believed that people are born gay, he asked Santorum if he agreed.