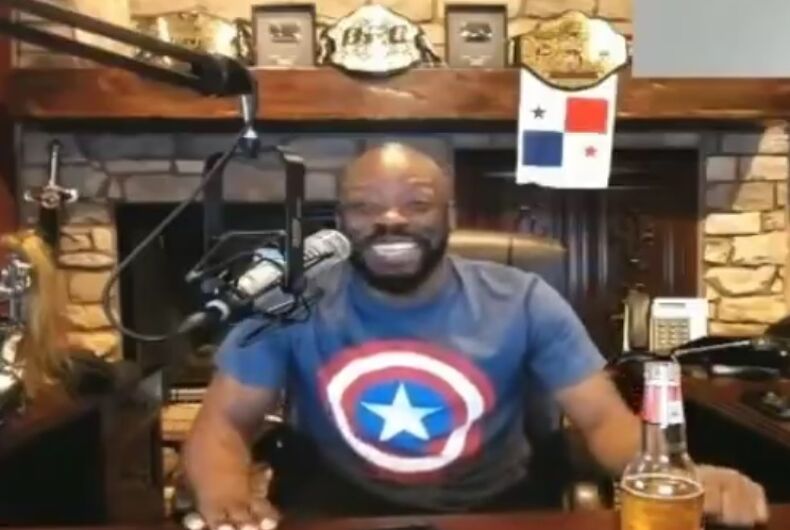 A far-right political commentator exploded in disgust when he found out he had been interviewed by a gay man.

In a video that’s gone viral, “men’s rights activist” Tommy Sotomayor can be heard screaming “Noooooo! He got a husband?[…] I shook his hand!” when he found out that he was interviewed by Dave Rubin, who is gay.

Rubin is a libertarian and the host of the conservative show The Rubin Report. Sotomayor is a YouTuber who is known for his extreme conservative views, including saying Black Lives Matter activists are “retarded kids” and saying that black people are a bigger threat than guns.

Related: Gay Republican blames too much sex for LGBTQ suicide because there’s no ‘better time to be gay’

Sotomayor appeared on Rubin’s show a while back and he talked about how much he doesn’t like gay people.

“You can’t even have a preference around a liberal,” Sotomayor whined. “A liberal homosexual says, ‘You should accept my lifestyle.’ But if you say, ‘Well, I accept your lifestyle, I just don’t want my kid to be one,’ well, you’re a bigot.”

Rubin told Sotomayor. “This is the type of stuff that I think needs to be heard more,” he said.

He apparently didn’t know that Rubin was gay, and his reaction when he found out on his YouTube channel Live w/ Tommy Sotomayor was over the top.

A viewer commented, “They hate Dave Rubin because he’s a gay man with the wrong opinions.”

“Nooooooooo! He got a husband?”

“I did not know! I was in his presence! I didn’t know! I shook his hand! Ahhhhhhhhh!”

“Why didn’t y’all tell me before I went on his show?”