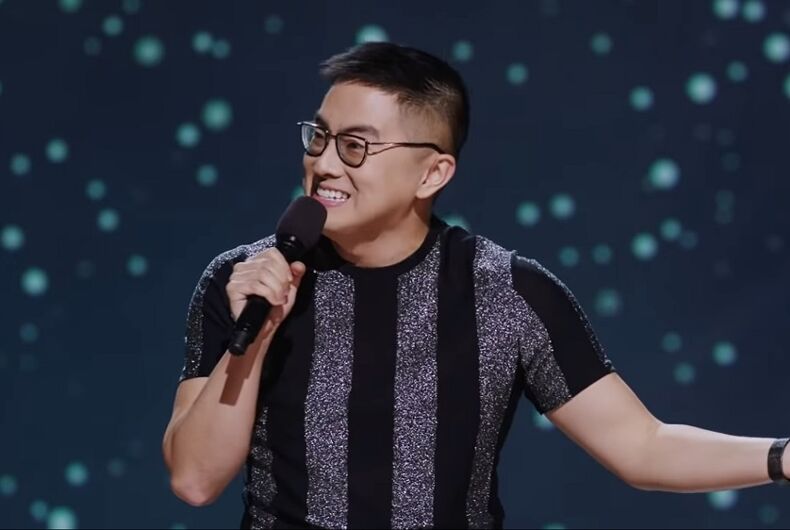 The cast for the 47th season of Saturday Night Live has officially been announced. Bowen Yang, a featured actor on the show for the last two seasons as well as being a series writer in 2018-19, has been made a full-time repertory cast member alongside fellow featured actress Chloe Fineman.

Beck Bennett — who has starred on the show for eight seasons as a regular cast member — and first-year featured actress Lauren Holt are the only departing cast members. The rest of the cast members from last season, including out comedians Kate McKinnon and Punkie Johnson, are returning.

Yang joined the cast as an actor in 2019, joining a list of very few out performers to do so. His own announcement being dampened by the hiring, then firing, of Shane Gillis at the same time.

However, Yang has quickly become a fan favorite on the show, and swooned people with his performance, such as with his portrayal of the iceberg that sunk the Titanic and appearances in sketches about sexy real estate fantasies or the pitfalls of Pride celebrations. He earned an Emmy nomination for

Yang is a nominee for this year’s LGBTQ Nation Celebrity Who Made Us Proud.

As for Beckett, he said to SNL fans via Instagram, “Thank you for 8 years of remarkable people and incredible experiences that completely changed my life. I had so much fun.”

Aristotle Athari is known for appearing in the HBO series Silicon Valley as well as directing numerous shorts and TV specials such as Tom Arnold: Past & Present Imperfectly.

Johnson has appeared on Adam Ruins Everything and Better Call Saul. He is considered to be the “best Trump impersonator of all,” meaning he will likely take the mantle from actor Alec Baldwin, who has guest appeared to impersonate Trump for the last several years and has previously won an Emmy Award for it, but has expressed disdain for the role.

Sherman goes by the name Sarah Squirm, which is also the name of her character in her latest short film Sarah Vaccine.

Sherman is known for her touring, “unconventional” and “boundary pushing” comedy show, “Helltrap Nightmare.” She was previously a creative consultant for the Eric Andre Show hosted by the eponymous out comedian on Adult Swim. She has also written for the Netflix show Magic for Humans and worked on Adult Swim’s Three Busy Debras.

The total cast will feature 21 repertory and featured cast members, the largest group in the show’s history. At the end of last season, many cast members — including McKinnon — were expected to leave.

The show’s ability to retain top talent has seemingly improved since they have allowed for cast members to engage in outside projects while remaining on the show full time, something executive producer Lorne Michaels previously did not allow.

Rami Malek, who played Queen singer Freddie Mercury in the biopic Bohemian Rhapsody, hosts the week after to promote the James Bond film No Time To Die, alongside androdgynous-dressing musical guest Young Thug. Out singer Brandi Carlile is the musical guest for the fourth episode of the season, with former SNL cast member Jason Sudeikis as host.

Editor’s Note: You can vote NOW, until September 30, for Yang or one of the four other nominees — Carl Nassib, Billy Porter, Mj Rodriguez, and JoJo Siwa — to become the LGBTQ Nation Hero Celebrity who Made us Proud. Vote here.

Welcome to the cast!

The U.S. Census has released data from its first ever survey of LGBTQ people. It ain’t pretty.