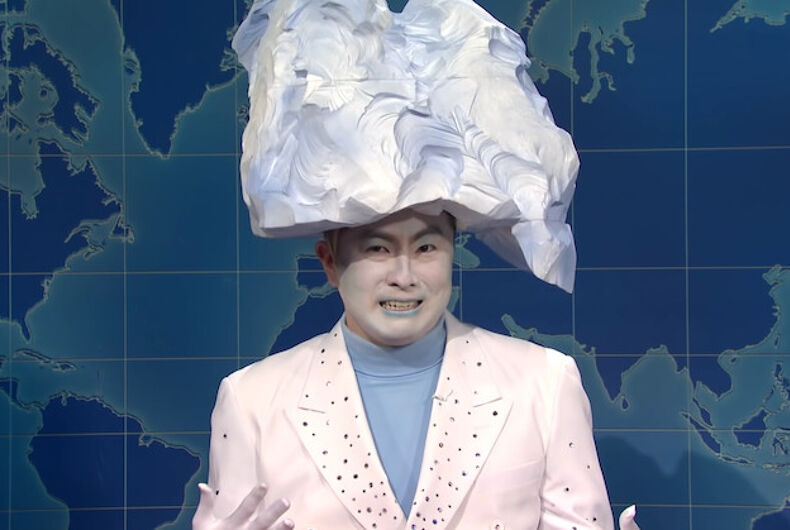 Whether it was out cast members Kate McKinnon and Bowen Yang in their respective sketches or Kid Cudi performing “Sad People” in a floral dress, it’s been a long time since SNL celebrated LGBTQ people instead of mocking them.

Related: Rosie sold her mansion for a $1M loss. It will be torn down & replaced with affordable housing.

Musical guest Kid Cudi wore a designer frock for his performance, saying it was a tribute to deceased singer Kurt Cobain who wore a similar dress on a magazine cover. While Cobain identified as “probably bisexual,” Kid Cudi is a cisgender straight man.

FYI: The idea of masculinity is a social construct, we all should know that. A piece of fabric doesn’t make you less than your preferred gender unless you want it to. Let people be liberated, beautiful, and visible without your 2 cents.

But Bowen Yang stole the show with his sassy impersonation of the iceberg that sank the Titanic.

“First of all, you came to where I live and you hit me. It was midnight. I was chilling. And then I hear this Irish cacophony behind me. And before I turn around and go, like, what? Half my ass is gone, which was my best feature. And I’m literally injured but all anybody cares about is that like, 40 or 50 people died or whatever.”

Genuine stupid joy to write this impossibly stupid but with Bowen Yang who is the Celine Dion of comedy. He delivers!!! https://t.co/0vGLADVp8R

A conservative org tried to mock Pete Buttigieg for denouncing racism. It blew up in their face.

Pete Buttigieg is winning over both Republicans & Democrats behind-the-scenes