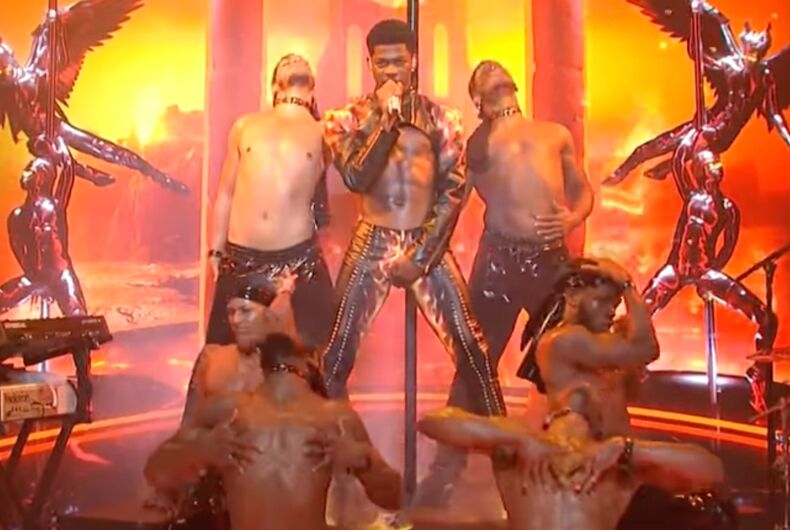 Last night’s finale for season 46 of Saturday Night Live was a very queer and eventful one.

In addition to a sketch reflecting on the pitfalls of Pride celebrations for LGBTQ people, out musical guest Lil Nas X performed his two most recent singles for the first time live, including the controversial hit “Montero (Call Me By Your Name)” — complete with sexual overtones and even a wardrobe malfunction.

Related: Lil Nas X made a new version of his controversial song… and Jesus Christ approves

The pre-recorded sketch featured the show’s three out cast members — Bowen Yang, Kate McKinnon, and Punkie Johnson — with host Anya Taylor-Joy, performing an ode to Pride, and all the things they love to hate about it.

The groups rejoice at the thought of getting to actually celebrate Pride in person this year. But as they dance and sing in their Pride regalia, things take a turn.

They never lose their upbeat tones or big smiles as they go on to sing about break ups, sunburns, overpriced drinks, and being surrounded by straight people.

“This is our St. Patty’s Day, acting sloppy ‘cause we’re gay,” they collectively croon.

“It’s inclusive and it’s great,” McKinnon sings, “but who let in all these straights?”

Then enters Nas X, shirtless and wearing a bright pink hat bursting with feathers and glitter. “Time for the Parade ya’ll,” he screams. “Let’s get messy.”

“You’d hate the drama on any other night, but during gay pride this is doing gay right,” he rapped.

The song finishes with the performers realizing they are riding on the Deutsche Bank float at the Parade and becoming disgusted with themselves.

Following the parody, Nas X did his first live performance of “Montero (Call Me By Your Name),” a song about gay sex and the title track of his debut album, out this summer.

The song made waves with the release of the video, which features Nas X giving the devil a lap-dance and several graphic references to gay sex. The video spawned immediate outrage from the religious right who condemned the video and rapper.

Nas X quickly started mocking everyone upset about the video, pointing out that Christians had told LGBTQ people they were going to hell for years.

For SNL, Nas X also did not hold back. He performed the song surrounded by male-presenting dancers fawning over him. At one point, one of them even licked his neck, a nod to when he licks the neck of the devil in the Montero video. When the performance ended, he posed against the pole with virtual flames of hell opening under him, and wings extending out behind him.

Yet, there was part of the performance that Nas X didn’t plan: ripping his pants.

NOT MY PANTS RIPPED ON LIVE ON TV

It was awesome anyway pic.twitter.com/MN8KyEG9Py

The leather pants split while the rapper was doing a pole dance, forcing him to hold his hands over his crotch for the rest of the song.

He took the mishap in stride though, not only finishing the performance without missing a beat, but also laughing about it on Twitter that same night.

Nas X took on a more somber tone for his second song, a moving rendition of his newly released Sun Goes Down, which addresses gay shame and suicide.

“These gay thoughts would always haunt me, I prayed God would take it from me,” he sings. “It’s hard for you when you’re fightin’, and nobody knows it when you’re silent.”