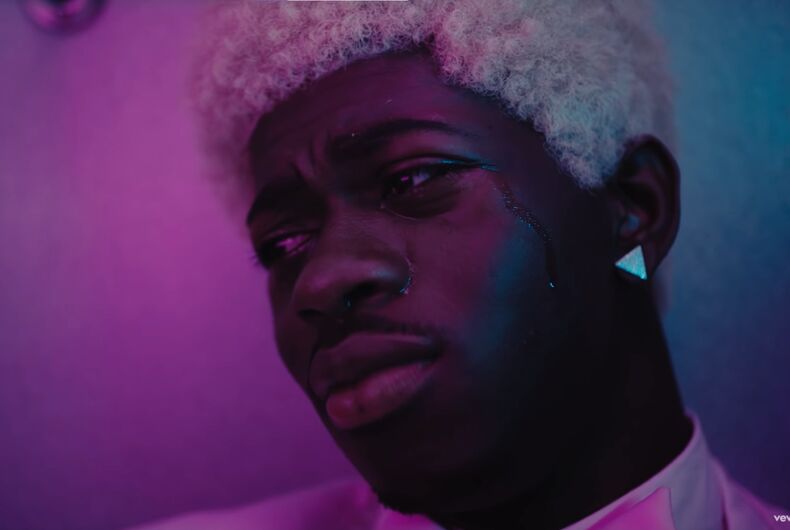 Lil Nas X released his latest single “Sun Goes Down” this morning with a video that shows him attending prom as a teen and his adult self as his own guardian angel.

“These gay thoughts would always haunt me, I prayed God would take it from me,” he sings. “It’s hard for you when you’re fightin’, and nobody knows it when you’re silent.”

Related: Lil Nas X finally releases new song & the video is super gay. How he released it was too.

In the video, Nas goes back in time to visit teen Nas, who works at Taco Bell, loves Nicki Minaj, and decides to go to the prom alone. He ends up crying in the bathroom as his classmates have a good time, and adult Nas comforts him.

“I know that you want to cry,” he sings. “But it’s much more to life than dying.”

The song also addresses his body image issues, which may come as a surprise to fans. Even Ellen was stunned by his beauty, telling him he’s “very good-looking” when he appeared on her show in 2019.

“Since ten, I’ve been feelin’ lonely, had friends but they was pickin’ on me,” he says in the song. “Always thinking why my lips so big? Was I too dark?”

“This song is very important to me,” he tweeted as he announced the new video. His father Robert Stafford makes an appearance in the clip.

sun goes down out now!
this song is very important to me.
hope you guys love it! 🤍 pic.twitter.com/G8jJX8piOU

Nas will be joining LGBTQ and ally performers like Ricky Martin, Demi Lovato, JoJo Siwa, the Brothers Osbourne, and Jennifer Hudson for a benefit concert on June 4 at 9 p.m. called “Can’t Cancel Pride.” The concert will raise funds for LGBTQ organizations like GLAAD, SAGE, The Trevor Project, and the National Black Justice Coalition and will be broadcast on iHeartRadio’s social media accounts and radio stations.

This is Can’t Cancel Pride’s second year, which was started last year during the coronavirus pandemic.