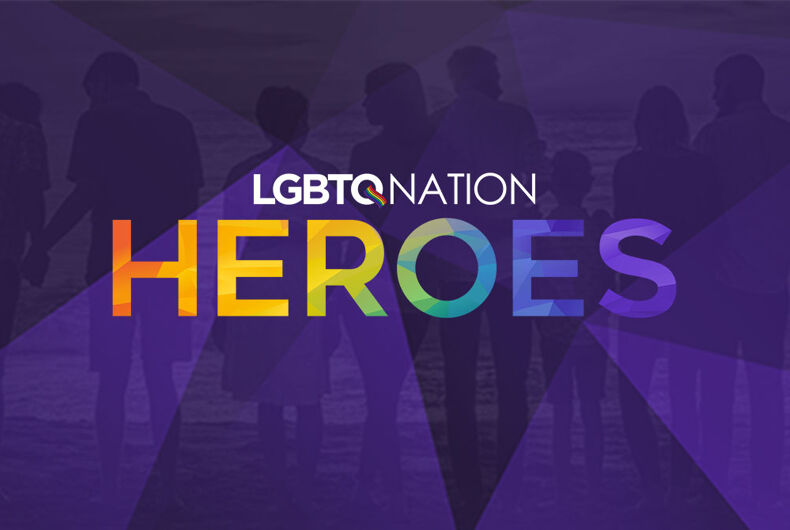 After a month of voting, here are the winners of LGBTQ Nation’s Heroes 2022!

Last month, LGBTQ Nation’s editors nominated 40 people across eight categories of heroes based on their impactful and newsworthy achievements from the past year.

Each of the nominees is a person who LGBTQ Nation is proud to call a hero.

Here are the ones who readers chose to represent each category.

LGBTQ Nation Hero of the Year: The Say Gay Teens

In the Florida Senate last February, Gen Z showed up and took no Boomer prisoners. And five teens stood out as leaders of this new generation of activists: Zander Moricz, Javier Gomez, Will Larkins, Abbie Garretson, and Jack Petocz

“I’ve heard different members of the Legislature say something along the lines of ‘parents know what’s best for their kids,’” Larkins testified in opposition to the Don’t Say Gay law.  “When it comes to the queer community, that is not true. If parents know what’s best for their kids, why did my best friend get kicked out of his house and have to live with me? Why do some many kids get abused for their sexuality and gender identity?”

These five activists in Florida have organized protests, staged walk-outs, written op-eds, given their own LGBTQ history lessons to students, spoken at the White House and Department of Education, been suspended from school and won Webby Awards for their online activism in opposition to the bill signed into law by Republican Gov. Ron DeSantis in March.

Celebrity who Made Us Proud: JoJo Siwa

At 18, teen sensation JoJo Siwa came out on Instagram with a family member’s support: her t-shirt read “Best. Gay. Cousin. Ever.”

Last fall, Siwa wowed the country on Dancing With the Stars, tango-ing into history with ballroom dancer Jenna Johnson as half of the show’s first ever same-sex dance team on the long-running and immensely popular reality competition. They cha-cha’d home with silver.

Siwa is nothing if not herself. That’s why, if you asked her, Siwa might say the most important thing she did over the last year was respond to a gay-baiting tweet with a speech at her concert in Columbia, South Carolina in March.

So said the 69 year-old founder of Bernard Wright Ministries, Bernard Wright, at a Facebook Live campaign event ahead of the Boynton Beach mayoral election on March 8.

Wright was competing in a field of four for the South Florida beach city’s top spot, including frontrunner Ty Penserga, a gay, Filipino science teacher and the town’s vice mayor.

And voters didn’t buy Wright’s “real man” schtick. Instead, they voted for Penserga because he stuck to real issues.

“I focused this campaign on issues, issues that really impact real people and their everyday lives,” Penserga said.

Hero Who Stood Up with Dignity: Sarah Warbelow

HRC legal director Sarah Warbelow testified at a Congressional hearing in July about the threat to the community’s rights from the Supreme Court overturning Roe v. Wade, including the rights of many LGBTQ people to obtain an abortion, something that dumbfounded Rep. Matt Gaetz (R-FL), who didn’t seem to understand what the definition of bisexual is.

“An individual who is attracted to people of both sexes – both men and… male and female – is someone who’s bisexual. They can be in long-term, monogamous relationships,” Warbelow explained carefully to Gaetz.

“I don’t ask this to be dismissive, but you’re saying that lesbian women are also capable of being into men?” he responded.

The point that he – like several other Republicans, including Rep. Marjorie Taylor Greene (R-GA) and Rep. Lauren Boebert (R-CO) – was trying to make was that LGBTQ people don’t need abortions because they can’t get pregnant.

Warbelow stood up to Gaetz’s badgering, even when he blasted her on social media, making sure that the diversity of the community could be understood by a wider audience.

In February, Texas Gov. Greg Abbott (R) ordered the Texas Department of Family and Child Services to investigate the supportive parents of transgender children, calling them child abusers and threatening to take their kids away.

In June, PFLAG and three Texas families stood up against the effort and sued to stop the investigations with help from Lambda Legal and the ACLU of Texas.

The next week, a restraining order stopped Texas from investigating parents named in the lawsuit. According to Lambda, any family threatened with investigation could now identify themselves as PFLAG members, shielding them from the discriminatory investigations.

Because they stood up and fought, they helped keep an untold number of transgender kids from being taken away from their families just because their parents supported them living authentically.

“Let’s be clear,” said PFLAG National executive director Brian K. Bond, “these investigations into loving and affirming families shouldn’t be happening in the first place. PFLAG National and our chapters throughout Texas remain committed to ensuring every transgender Texan is safe, empowered, and can thrive.”

In a major win for gender equity in sports, the U.S. Soccer Federation (USSF) agreed in May to pay players on its men’s and women’s teams equally.

You can thank Megan Rapinoe.

The policy change came after Rapinoe and 27 of her teammates filed an EEOC complaint for equal pay in 2016, and then a lawsuit in 2019 accusing the USSF of gender discrimination.

Soccer got the message and the USSF reached an agreement to make pay more equitable between their women’s and men’s teams.

Rapinoe was awarded the Presidential Medal of Freedom by President Biden in July for that work, and more. “Megan is a champion for an essential American truth,” Biden said in remarks. “That everyone — everyone is entitled to be treated with dignity and respect.”

The Buttigieg family grew by two last year. The couple teased in August they were expecting and broke out the snapshots in September.

The two gay dads were beaming.

Chasten and I are beyond thankful for all the kind wishes since first sharing the news that we’re becoming parents. We are delighted to welcome Penelope Rose and Joseph August Buttigieg to our family. pic.twitter.com/kS89gb11Ax

Fatherhood only added to Buttigieg’s already expert command of the issues facing the LGBTQ community. On the subject of Don’t Say Gay in Florida, Buttigieg went full gay dad when CNN asked if it was dangerous.

While rightwing politicians and pundits mocked him for being a gay dad, Buttigieg stood up for his dignity. He nailed Sen. Marco Rubio (R-FL), who called protections for same-sex marriage rights a “stupid waste of time.”

“If [Rubio’s] got time to fight against Disney, I don’t know why he wouldn’t have time to help safeguard marriages like mine. Look, this is really, really important to a lot of people. It’s certainly important to me,” Buttigieg said on CNN’s State of the Union this weekend.

Buttigieg also found time to send a letter of support to a gay teen activist.

The reader-nominated Hometown Heroes will be announced throughout this month.

Editor’s note: The title of Social Media Hero has been rescinded. The editors of LGBTQ Nation came to this decision after some problematic social media posts from the previous holder of that title came to light that showed that this person does not share the values of this website.