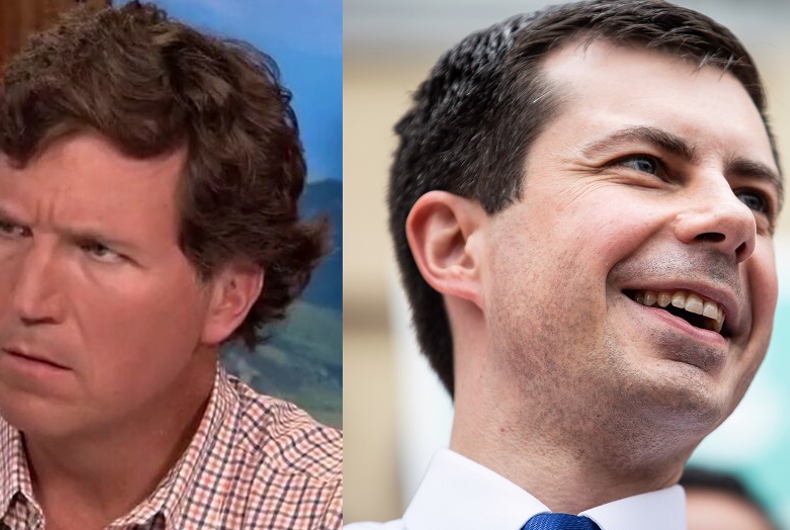 Carlson described Buttigieg as a young effeminate and unqualified choice for the job and told viewers that the secretary “breastfeeds” his adopted twin babies and made a joke about Buttigieg’s sex life.

The far-right host bemoaned the state of American infrastructure on his show and blamed Buttigieg for the issues that have plagued the country since the start of the pandemic. With coronavirus-related issues bedeviling the country, from inflation to the short supply of consumer goods, Carlson has chosen the gay man, along with Vice President Kamala Harris, as the villain in the tale he’s weaving for his audience.

During the show, Carlson complained that Biden didn’t choose a “competent” Transportation Secretary.

“But that’s not with the Biden administration did. They had a more progressive idea. Joe Biden hired a kid, by contrast, who had never had a real job outside McKinsey and no grounding of any kind in physical reality,” Carlson said.

McKinsey is a consulting firm with multiple government contracts that Buttigieg worked at before his military service and two terms as mayor of South Bend, Indiana.

“When Pete Buttigieg was mayor, the city had, and we’re quoting now, the worst pothole situation in the state according to the local paper. Huge potholes. So big that Mayor Pete – not a tall man – could’ve disappeared into one. You can picture his little legs up in the air. Eight years as mayor, and he was never able to fix it,” he continued.

“This guy, who literally couldn’t fix the potholes in South Bend, Indiana, is now the transportation secretary. But he breastfeeds so it’s equity! It’s unbelievable!”

As part of a blatantly homophobic smear campaign, Carlson joined GOP politicians in attacking Buttigieg’s decision to spend time with his husband, Chasten, and their newborn twins, Penelope Rose and Joseph August earlier this year.

“Pete Buttigieg has been on leave from his job since August after adopting a child. Paternity leave, they call it, trying to figure out how to breastfeed. No word on how that went,” Carlson ranted during a piece on inflation and rising prices.

Fox News provides employees with six weeks of paternity leave – and encourages them to use it.

“This is largely a consensus issue, ” Buttigieg said, “not just a support for families like mine to have a right to marry and right to be treated equally but also that families in general, moms and dads, ought to be able to support their children, including with paid family leave.”

“I’m blessed to be able to experience that as an employee, being able to have the flexibility to take care of our newborn children, which is, by the way, work,” he continued. “It’s a joyful work. It’s wonderful work, but it’s definitely work.”