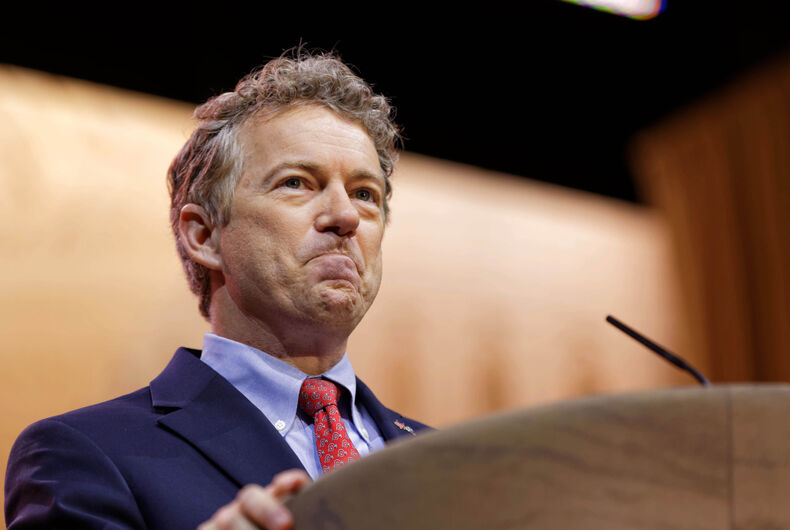 Sen. Rand Paul (R-KY) has released an anti-trans campaign ad as part of his reelection campaign.

The ad features former University of Kentucky swimmer Riley Gaines, who has been vocal in opposing trans swimmer Lia Thomas’s participation in women’s NCAA competitions. Gaines tied with Thomas for fifth place in the 200-meter freestyle at this year’s NCAA championships.

In the ad, Gaines claimed that “for girls across America” the dream of being a successful athlete is “being taken away by men competing in women’s sports.” At that moment, a photo of Thomas appears on the screen.

“Sadly, few stood up for me,” Gaines said. “But Rand Paul is not afraid to fight for fairness for women and girls.”

Rand Paul then speaks to approve the message “because I’ll always fight for fairness.”

Gaines has been speaking out against trans athletes for a long time and has become a mouthpiece for anti-trans Republicans.

In 2021, she appeared in an attack ad put out by the Republican Governor’s Association against Kansas Gov. Laura Kelly (D) after she vetoed bills banning trans girls from women’s sports.

“I was forced to share a locker room with a biological man. It was uncomfortable and it was wrong.” Gaines said in the ad.

“This has to stop,” she concluded. “If Laura Kelly can’t protect women, she shouldn’t be governor.”

Gaines also recently joined Herschel Walker, Georgia’s anti-LGBTQ Republican Senate nominee, at a rally where Walker voiced his belief that trans kids will not get into heaven.

This is also far from the first time Paul has taken a stance against the trans community.

Last year, Paul went on an anti-transgender tirade when questioning Admiral Rachel Levine, who was at the time President Biden’s nominee for assistant secretary of health. She now holds the position.

Paul decided to rant about how gender affirming health care for transgender kids should be banned instead of left up to families and doctors. He peddled lies about transgender health care and the treatments available to trans youth and peppered Levine with questions about trans identities, declaring that transitioning is a “temporary, superficial fix for a very complex identity issue.”

“You give a woman testosterone enough that she grows a beard,” he said, “you think she’s going to go back to looking like a woman when she stops the testosterone?”

In another rant around that time, Paul called trans girls “hulking six-foot-four guys”

“Are we all gonna be OK with hulking six-foot-four guys, you know, wrestling against girls doing- You know, it just makes no sense whatsoever.”