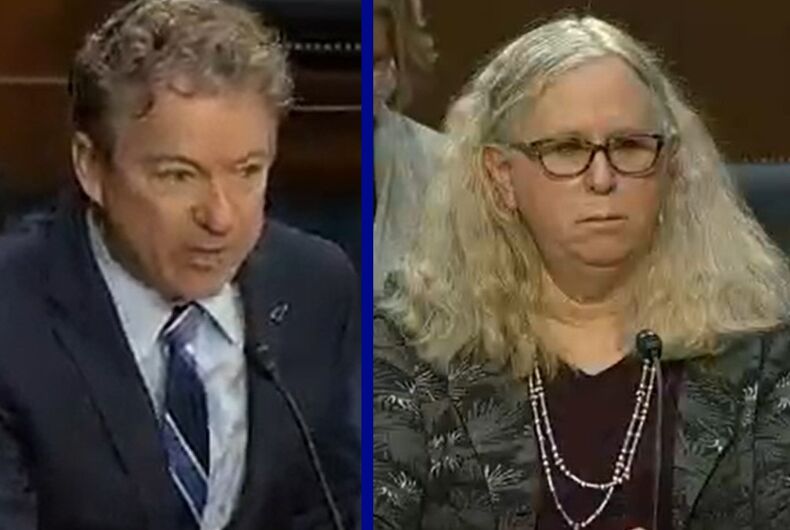 The Senate Health, Education, Labor and Pensions (HELP) Committee held a joint hearing to confirm Surgeon General Nominee Dr. Vivek Murphy and Dr. Levine, who is transgender and is the current surgeon general for Pennsylvania. Most questions focused on the government’s response to COVID-19.

But Sen. Paul decided to rant about how gender affirming health care for transgender kids should be banned instead of left up to families and doctors.

He went on to say that genital mutilation is egregious because “it is nearly always carried out on minors and is a violation of the rights of children.”

If he wanted to compare bottom surgery to genital mutilation, he was already starting out wrong – it’s almost unheard of for minors to get bottom surgery. In fact, that’s why everyone is talking about puberty blockers all the time – to give trans youth more time to understand themselves before puberty permanently affects their bodies.

He then turned to puberty blockers and cited the American College of Pediatricians, an SPLC designated hate group that promotes anti-LGBTQ bias. It is often confused with the American Academy of Pediatrics, the real professional association for pediatricians that urges parents of trans kids to “listen, respect and support their child’s self-expressed identity.”

Paul says that “80 to 90 percent” of children with gender dysphoria “will experience resolution,” a euphemism for stopping being transgender. This statistic is fake but Paul said it anyway at a Senate hearing.

“Dr. Levine, do you believe that minors are capable of making such a life-changing decision as changing one’s sex?” Paul asked Dr. Levine, who appeared shocked by the entire rant.

But Paul shot back: “The specific question was about minors” and accused her evading the question

“Do you support the government intervening to override the parents’ consent to give a child puberty blockers, cross-sex hormones, and/or amputation of breasts and genitalia?” he asked.

He then said that he “would hope you would have compassion” for a person who took puberty blockers as a teen and then stopped. He then called transitioning a “temporary, superficial fix for a very complex identity issue.”

Again, Dr. Levine said, “Transgender medicine is a very complex and nuanced field” and that she “will certainly be pleased” to talk about it with Sen. Paul if confirmed.

“Let it go into the record that the witness refused to answer the question,” Paul said.

“You give a woman testosterone enough that she grows a beard,” he said, not talking about puberty blockers at all anymore, “you think she’s going to go back to looking like a woman when she stops the testosterone?”

He said that “dozens of people who have been through this regret that it has happened” and that there are “no long term studies” on the effects of puberty blockers, even though there are and the science shows that transgender teens who wanted puberty blockers and got them have a significantly lower risk of suicidal thoughts than those who didn’t get them.

Most of the other senators asked Dr. Levine about the government’s response to the COVID-19 pandemic.

Update: A previous version of this article did not correctly state the name of the American Academy of Pediatrics. We regret the error.