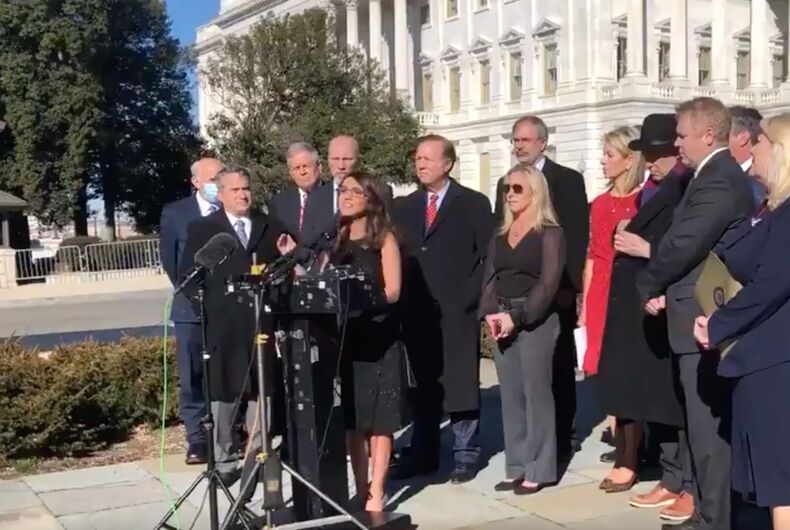 Rep. Lauren Boebert (R-CO) is another radical Trump acolyte known for her support for the Capitol insurrection and her gun fetish. The Congresswoman recently made headlines when she posed for a Zoom meeting with several loaded guns propped up behind her in an unsafe manner.

The Congresswoman is regularly compared to Rep. Marjorie Taylor Greene (R-GA), a QAnon believer who has been stripped of all committee assignments after endorsing the assassination of House Speaker Nancy Pelosi (D-CA). Like Greene, Boebert is viciously – and proudly – anti-LGBTQ.

The GOP has been using transgender women as the scapegoat for their opposition to the bill. They have repeatedly denigrated trans kids and student athletes, and accused the parents of trans people of being neglectful or abusive.

During an unhinged rant full of fake claims about transgender pre-teens, Boebert managed to bring her transphobic comments around full circle to loop in an anti-gay stereotype that all gay men are feminine.

She said she is raising her four sons “to be men” and she is “proud of that,” according to Washington Blade reporter Chris Johnson.

Lauren Boehbert, against the Equality Act, says as the mother of four boys, says raising them “to be men,” and “proud of that.” pic.twitter.com/PsE7vYRcey

Yesterday, Greene and Rep. Marie Newman (D-IL) made news after a back-and-forth over trans rights in the hallway between their offices. When Newman hung a trans flag outside her door, Greene responded by posting a transphobic sign outside of her office so Newman would have to see it. Newman has a transgender child.

Will enough Republican senators sign onto the Equality Act for it to pass? Probably not.